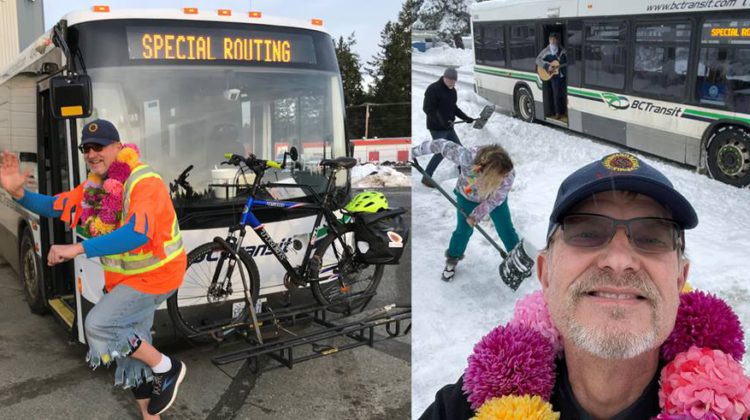 During the last weeks of snow, a man in a bus spread random acts of kindness cheering people up.

As an unusual amount of snow hit the Valley a few weeks ago, bus driver JD Ludlow figured it was time to give back.

Assembling a crew of musicians, politicians and other volunteers, they toured around the valley in an out-of-service bus playing music and finding driveways that needed to be shovelled.

The plan turned out to be a big hit and they helped members of the public, businesses and local media.

It isn’t the first time Ludlow has given back. Known locally as the “Flowerman”, he likes to use his colourful personality to befriend others and put smiles on their faces.

Ludlow’s journey to helping others began as a journey of self-help. He says mid-June last year, he purchased his last cigarettes after 25 years and made a commitment to living a healthier lifestyle.

Ludlow says he cycled more than 2,300 kilometres on his bike and lost 70 pounds in 14 weeks. He says this helped him cure his pre-diabetic symptoms.

“In May I was told by my doctor that I was pre-diabetic, but I completely turned that diagnosis around with diet and exercise,” he said. “ I shared my journey on social media and got a Facebook message from Marnie Evans, who donated her slightly used bike and new helmet so I could give them away.”

A competition was run for people to win health-oriented prizes through the Comox Valley Regional District.

Laura Dahl would win the prize. After moving from Manitoba to the Valley in 2020, she was hoping for a change of scenery as she battled depression.

She’ll be riding with Ludlow in the spring to be shown routes around the area and receive a six-month bus pass from the CVRD.

“I’m really thankful to JD for inspiring me to lead a healthier lifestyle and giving me this opportunity to get in better shape,” said Dahl. “My body, mind and emotions are better since moving to the Comox Valley, but I need to work at keeping every part of me healthy and well so that I can continue living a great life for a long time.”

To learn more about what Ludlow is up to, you can visit his website at www.theflowerman.ca.