BY DAVE FLAWSE / PHOTOGRAPHY BY DANIKA MCDOWELL
It’s a crisp September afternoon, and I’m strolling with my wife and two young children past our neighbour’s house in the Comox Valley. Al Shanks waves, beckoning me over to his driveway. “I got your uni!” 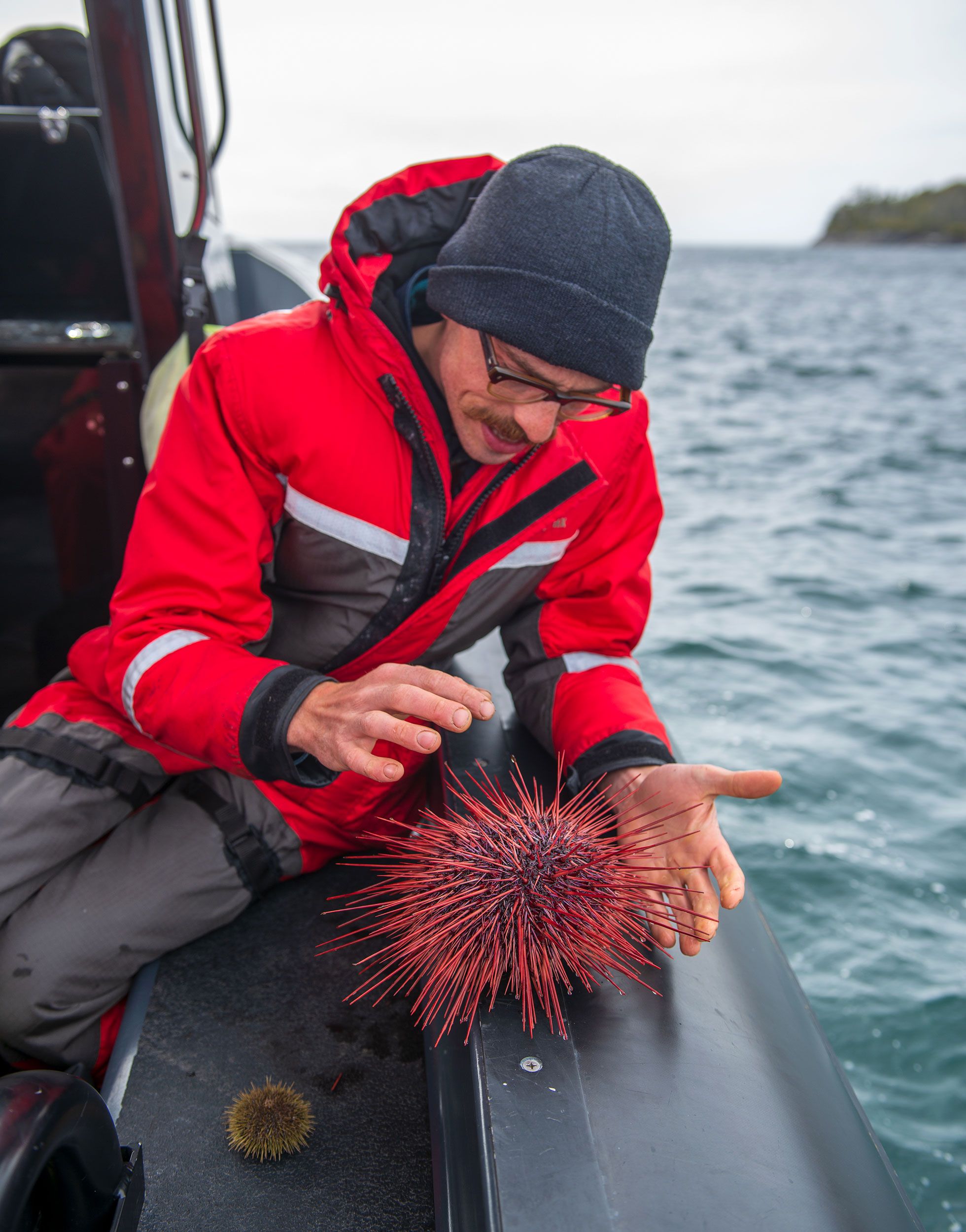 He owns A.B. Diving, an outfit that harvests sea urchins (uni), sea cucumbers and geoduck clams destined for Asian markets. A veteran of the fishery, he’s been harvesting seafood for almost 40 years. He and his small crew search for their bounty while fighting the weather aboard a 36-foot Eagle Craft. Not a large boat, it has two bunks and a table that converts into another bed where they sleep during their month-long stints.

Geoduck (pronounced gooey duck) can be found up and down the entire B.C. coast, living between intertidal zones and up to 110m underwater. Divers trudge along the bottom with an air supply hose to dislodge the burrowing clams—some of which have been alive since the 1850s. They can be found buried over a meter deep on sandy beaches.

While there are 30 kinds of sea cucumbers, only one kind is harvested in B.C. The red sea cucumber is found on the ocean floor up to depths of 250m and is largely exported to China where the dried form is used in a variety of dishes and as traditional Chinese medicine.

Sea urchins are abundant on the B.C. coast. The great “herds” consume so much kelp, they leave vast areas of devastated kelp forests called urchin barrens. Because sea urchin can be harvested year-round, removing the need for storage, it was historically an emergency food for coastal peoples around the world. Free divers can pluck the spiky creatures (along with sea cucumbers) from the seafloor, or they can simply be gathered from tide pools. While there are hundreds of sea urchin types, the two most commonly harvested in B.C. waters are the green and red sea urchin.

Shanks promised me greens after I expressed interest in trying some, and I peer into a small cardboard box he’s holding to see six of the spherical, spiky creatures. “These are as fresh as you can get,” he says. “Caught this morning.”

If I look closely, I can see the sea urchins’ spikes wriggle (yes, they’re very much alive). The hard calcite spikes double as locomotion and defence against hungry predators. “If you get one of these in you,” says Shanks, “it’ll take months to come out.”

I ask him how to eat it and he tells me to wait a minute. He returns from his house armed with a spoon and a large knife. Then he carefully picks an urchin up and places it on the closest flat surface he can find in his driveway—the lid of a tall garbage can. He flips the sea urchin’s beak upwards (a five-point structure called an Aristotle’s lantern it uses for eating) and crunches the knife through the hard shell, exposing a cavernous opening full of kelp pieces intermixed with five bright orange strips of roe.

My wife, wearing our infant daughter in a baby wrap on her chest, hesitantly leans in to inspect. I can see on her face what she’s thinking—we’re going to eat that? 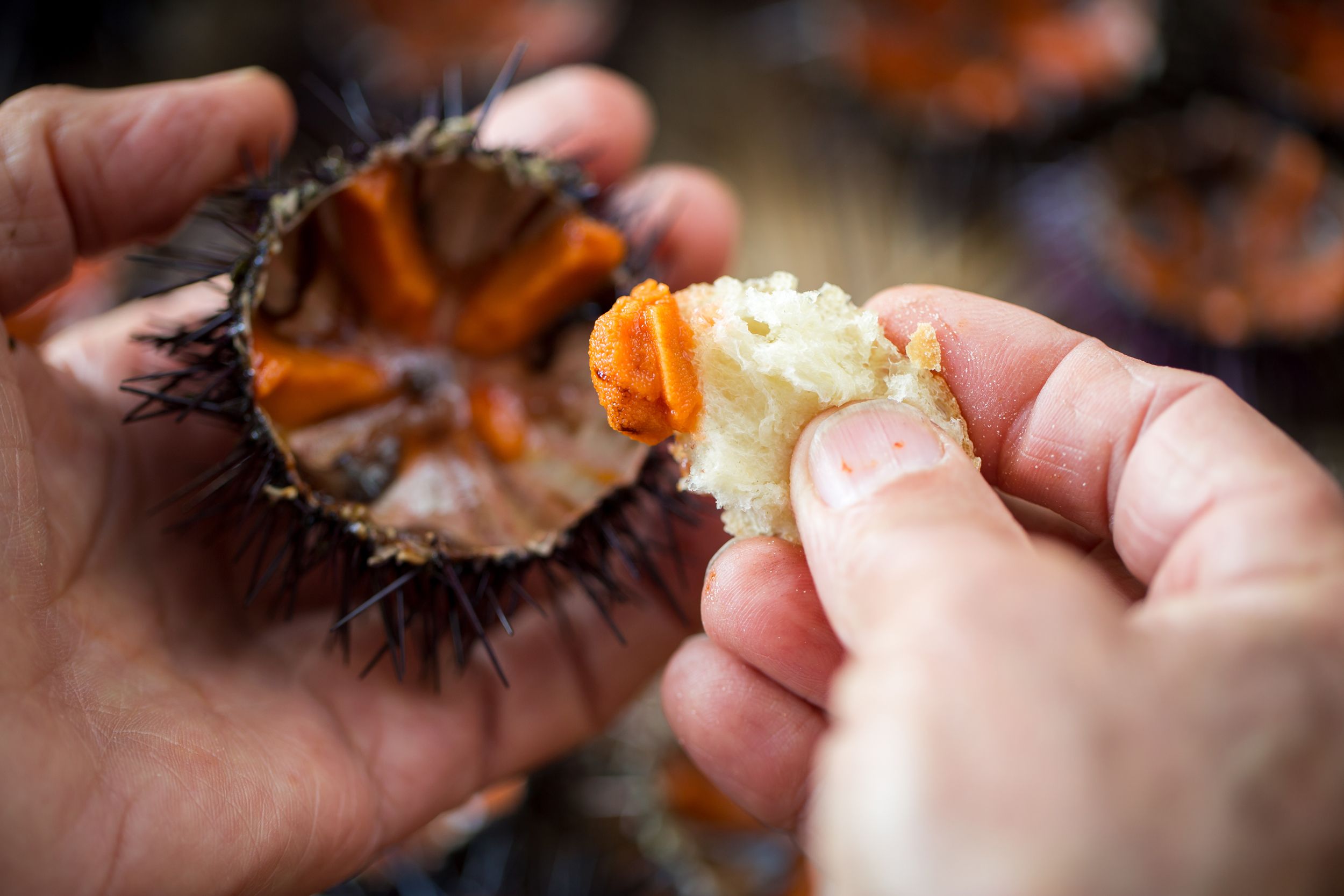 Served from the shell, sea urchin leaves much to be desired on the ambiance front—especially when served a la trashcan. Considered a delicacy the world over, it would be presented raw atop rice (uni nigiri) in Japan, or made into a butter and lemon sauce (salsa de erizos) and served over fish in Chile.

Yet slicing into this creature in the driveway elicits a suiting feeling. Like shucking oysters on the beach or filleting salmon on a dock, this bold, primitive food experience makes me feel closer to and more invested in consuming the creature. Plus, Shanks’s enthusiasm for the product really helps. It was caught not far away, and I trust he knows what he’s doing.

Shanks digs the spoon in, dislodges a strip of orange roe from its shell, and blows off bits of kelp before popping it into his mouth. He hands me the spoon. I have enjoyed uni in a sushi restaurant a couple of times, but that flavour was a mere echo of this. The soft roe melts in my mouth and reminds me of oyster from the half shell, only sweeter and more delicate.

It is delicious. My wife tries and agrees. Our toddler, who is watching this event from a stroller, seems curious. I give a small piece, and he frowns but swallows it. When I offer him more, he shakes his head “no”—it’s not for everyone.

We wave goodbye to Shanks, carrying our generous gift of uni and a little knowledge of how to prepare this treat from the sea. He’s promised to make us geoduck ceviche next, and we’re looking forward to exploring more of what our local waters have to offer.

This article was originally featured on Edible Vancouver Island on January 26th, 2022.