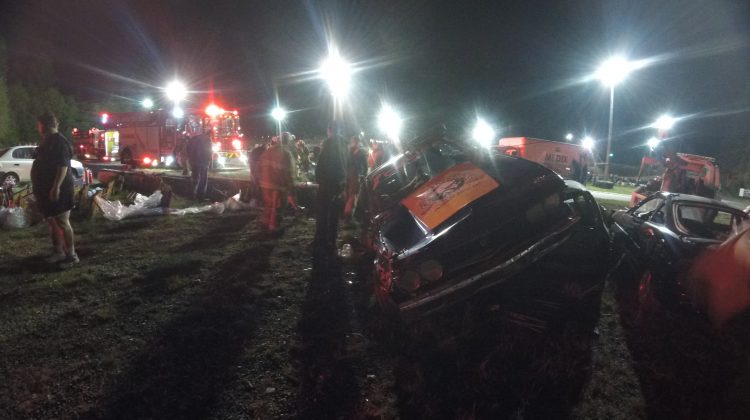 The scene of the incident is shown after the car was lifted off of the man on September 29th, 2018. Photo by Kieran Wilkie/98.9 The Goat/Vista Radio

BLACK CREEK, B.C. – A man injured during a scary incident at Saratoga Speedway is in critical, but stable condition.

That’s according to a statement sent to the speedway by the victim’s sister, Jennifer Sedman.

“He (the victim) is at Vancouver General Hospital. He is currently in the ICU awaiting surgery. He is in critical, but stable condition,” she wrote.

“Just want to do a shout out to everyone and all the drivers. Thank you for your concern. It was just a fluke accident.”

According to witnesses, a car flipped off the race track and struck Sedman’s brother, who was at the venue setting up a fireworks show.

Multiple emergency services were called to the scene, with the Oyster River Fire Department responding to the area.

An employee at Saratoga Speedway, Jessica Wood Underhill, said everyone at the speedway is extremely saddened by the event and are hoping the best for the victim.

Saratoga Speedway management has been reached for further comment.