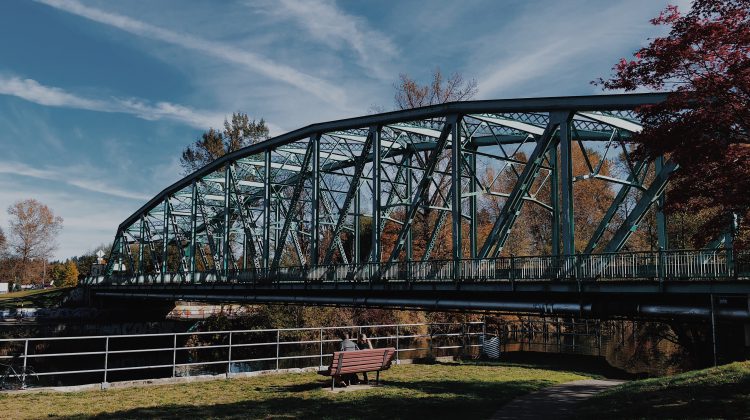 Two people sit on a bench near the 5th Street Bridge on October 20th, 2018. Photo by James Wood/98.9 The Goat/Vista Radio

COURTENAY, B.C- The search is on to find money for the 5th Street Bridge.

In late November, Courtenay city council received a major shock as the price for important maintenance work on the crossing went up by millions of dollars.

The bridge has been slated for major reworking for multiple years, including a complete repainting of the bridge, removal of existing lead paint, repairs to structural steel and handrails, and the re-surfacing of the bridge deck.

Due to increases in anticipated costs, the bridge renovation is now expected to cost $3.4 million more than what was previously laid out in grants.

The work, if set in motion by council, could completely shut down the bridge for five months, or six months if traffic is allowed through in alternating lanes.

According to Courtenay mayor Bob Wells, city staff are now looking for grant funding to help fill in the funding gap.

“As we found out, the cost more than doubled, but the cost to city taxpayers went from $800,000 to $4 million, and that’s more than four times as much as we had budgeted for our local contribution to that project,” said Wells, speaking earlier this month.

“That’s extremely significant, so we’re going to really have to make sure we’ve got that dialed in.”

According to Wells, city staff are going to be looking for any grant funding that’s possible for the work.

“Barring that, given the fact that we have to get on with that work, we waited so long even for those grants to come through, we may have to look at other funding sources, whether that be long term loans or something else,” said Wells.

A firm decision on what to do about the bridge has not yet been made by city council. That’s expected to come during the city’s budget planning process in 2019.