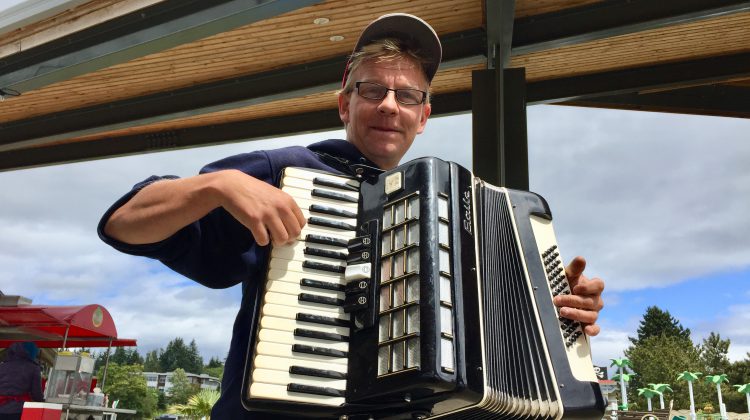 Johnny Cunningham has been at odds with the Town of Comox since he was asked to leave the Marina Park by the park’s caretaker after receiving complaints.

Since his story appeared on MyComoxValleyNow.com, Cunningham said he has received tons of support locally, and across Canada.

“It just blew up. It took off,” Cunningham said.

Cunningham added the amount of support that he has received changed his mind about getting a license to busk in the town.

“So I decided to go get one,” he said. “The next thing I know, they called me two weeks later and said that I can’t have one because I’m too noisy. I was a little shocked.”

Mayor Russ Arnott confirmed that the town plans to meet with Cunningham tomorrow to find a solution.

“It’s not a matter of not giving a license, it’s just about putting into place the policies that we already have and ensuring everybody follows them,” Arnott said.

“We welcome all sorts of buskers down to the marina. In fact, it was a number of years ago where the council of the day moved strongly to get food vendors and buskers down there.”

Cunningham did perform this past Sunday at the park next to the Comox Harbour, and said he didn’t receive any complaints.

Whether or not he returns to the park again to play, is up in the air.

“I don’t want to bother the people on the boats,” he said. “The people that are complaining… I have more respect for people than that. But at the same situation there’s a lot of people who like it, so I’m thinking about it.”

A GoFundMe page has been launched, looking for support from the public.

It reads, in part, “The town of Comox BC Canada is abusing  their power as a municipality by banning accordions from performing in their town even while they have a busking bylaw if you play accordion you don’t get a license, It amounts to nothing more than discrimination under the Canadian charter of rights…”

“I think this is discrimination against accordion players,” Cunningham said.

Arnott said the challenge is to find a balance of buskers who stay in one place for a long time “or do they move to a different part of the town to do their busking?”

“It’s up to us to listen to all sides and to find a fix to this. We’re not going to be strong-arming anybody, we just want to make sure everybody has a positive experience down at the park as its use becomes more and more popular down there.”