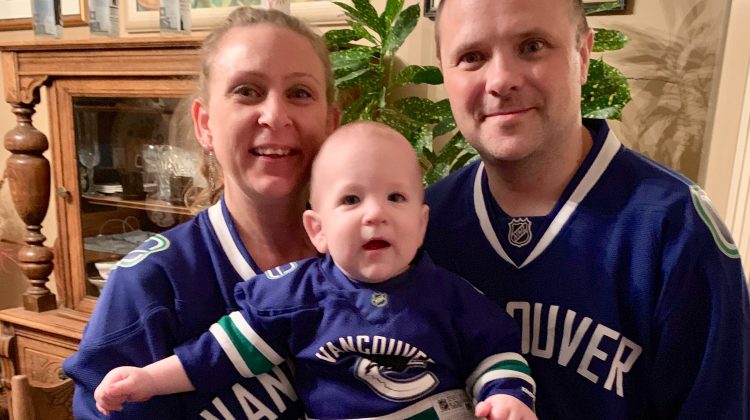 Jonathan Sedman with his family. Sedman is returning to Saratoga Speedway on Sept. 28, almost a year to the day when he was seriously injured after a car flipped on top of him. (Supplied by Jonathan Sedman)

Jonathan Sedman’s long road to recovery is about to come full circle.

The 42-year-old Surrey resident is coming back to Saratoga Speedway on Sept. 28.

His return comes almost a year to the day when he suffered life-altering injuries after he was pinned under a car that lost control and flipped over on top of him.

Sedman was setting up fireworks but when it started to rain, he rushed to put a tarp over them.

“The water was really starting to pile up, and I guess I kneeled down to do something and I guess one of the race cars flipped and landed on top of me,” he said.

This is all based on second-hand information. That’s because heading out to the fireworks was the last thing he remembers before he woke up in the hospital.

That’s when he was told he had been in an accident, and that his son, Kayden, was born.

He spent six months in the hospital and wasn’t able to walk until the beginning of January.

The list of injuries is extensive: a brain bleed, seven broken ribs, collapsed lung, perforated bladder, his urethra was separated from his bladder, multiple cuts and bruises, and nerve damage in his lower left leg.

And while in hospital, Sedman got necrotizing fasciitis (flesh-eating disease) and had to have a piece of his left buttock removed.

“That makes it a little bit hard to walk,” Sedman said. “Other muscles have to kind of kick in, in order to pick up for what I’ve lost and whatnot. And I’ve got nerve damage from the knee down and I’ve got drop foot on my left foot, so all considering, I’ve come out pretty good. At least I’m still able to walk.”

Sedman has been off work since it happened.

“I wasn’t able to get up or walk until the beginning of January,” Sedman said.

“It’s been long, been hard, but day-by-day right?”

A big reason for his return to the central Island is to thank everyone at their speedway for their support.

Sedman is very grateful for all that’s been done for him.

“It’s pretty impressive,” he said. “We had a friend of the family started a GoFundMe page and, I was looking at the list of donors and there are people on there I don’t even know. So there was a lot of people who obviously heard the story and donated, which helped huge because my girlfriend (Christa) just had our baby and she’s on maternity leave and I’m in a hospital.”

He said the money from the GoFundMe was “huge” in helping to pay the bills.

Sedman said he is thankful he is here, considering what happened.

He isn’t sure what kind of emotions he’ll feel when he sets foot on the speedway soil again.

“I don’t know what will happen when I get there, what type of emotions will come through the floodgates, obviously, but I have no issues at the moment of going back,” Sedman said. “Even if I was well enough to do a fireworks show, I would have no problem at the moment doing it.”