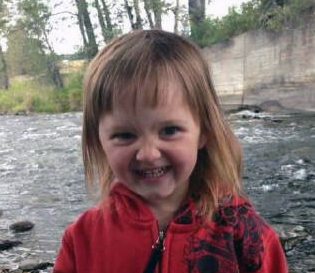 The Crowsnest Pass RCMP has received a report of the abduction of a 2-year-old female child which took place at 3:30 a.m. on September 14, 2015 in Blairmore, Alberta.

Hailey Dunbar-Blanchette is described as:

Police are also looking for an unknown person driving a new model white van, with a large rear antenna with a flag attached. The vehicle was last seen driving west from the residence.

Her father, 27-year-old Terry Blanchette, was found dead at the scene and police say the homicide unit has been called in to investigate.

Anyone who may have seen Hailey Dunbar-Blanchette or the suspect vehicle are asked to call 9-1-1 immediately.

Further updates will be provided when new information is available.