Comox Firefighters Honoured for their Service 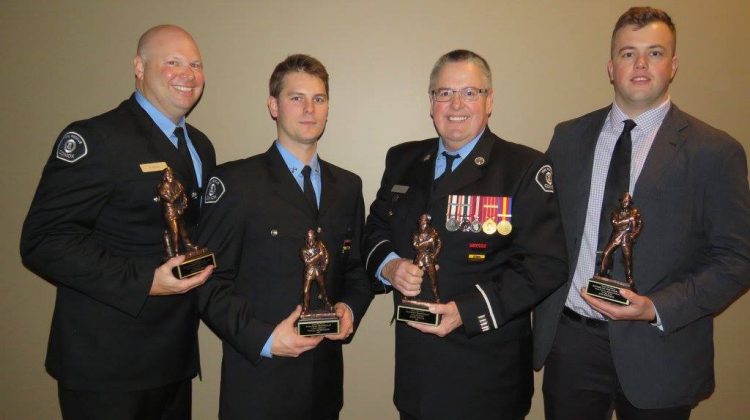 For their 20 years of service, Captain Robert Stevens and firefighter Al McMurdo each received a federal long service medal.

Jon Watkins was awarded Rookie of the Year, while Brent Craven was named Firefighter of the Year. Captain Pascal Lafreniere received the Stewart Rennie Memorial Award titled “I Made a Difference!”.

Lieutenant Jerry Snook was given the “Above and Beyond” Kevin Kimler Memorial Award.

Assistant Chief Jim Lariviere was acknowledged for his outstanding dedication and commitment to the organization and community.

Comox Fire Chief Gord Schreiner says, “I am so proud of all of our members. It takes a very special person to volunteer for anything, let alone to be a firefighter and an even better person to serve for many, many years. We are very demanding of our firefighters and expect a very high level of training and effectiveness from them. We are very fortunately, here in Comox to have such a great group of firefighters assisting our community in so many ways. Our firefighters are our most important asset. Combined our three Chief Officers have over one hundred years of service. We are a successful organization because of all the great people we have within the organization.”

Together, they total about 400 years of service and respond to about 700 emergency incidents a year.