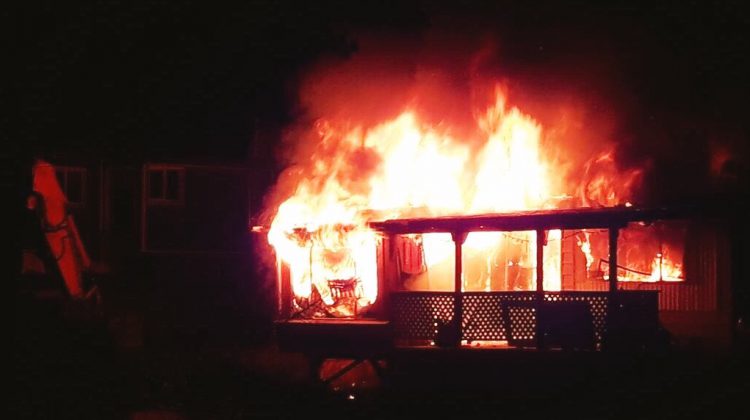 A photo of the second fire at the double-wide home in Comox. Photo courtesy of Meghan McPherson.

COMOX, B.C- A home damaged by fire in Comox yesterday afternoon had to be extinguished a second time, after a hot spot flared up overnight.

The Comox fire department responded to the scene around 12:30 a.m. on Tuesday, after the double-wide trailer on Alvord Crescent went up in flames. According to Comox Fire Chief Gord Schreiner, the source of the fire was an unattended toaster oven.

A total of five fire trucks and 22 firefighters responded to the call. Both the responding firefighters and the woman who owned the home avoided injury in the fire, though a pair of cats were missing after the flames were put out.

As of Wednesday morning, one of the cats remains unaccounted for.

“Whether it succumbed to the fire, or whether it ran away, we’re not sure yet,” said Schreiner.

According to Schreiner, the overnight fire was sparked by a “rekindling” in one of the trailer’s rooms.

“When a building catches on fire like this, there are a lot of hot spots and opportunities for a fire to grow again,” said Schreiner.

“I’ve said to many people, the chance of a house catching on fire the second time is much greater than the first time, there’s lots of opportunity because of the hot spots in there, there could be spots in the wall, or underneath some dry material.”

As of this morning, firefighters are still at the scene, cleaning up and investigating.

In the wake of the fire, Schreiner asked for Comox residents to be focused on their cooking, and to make sure they had working smoke alarms.

He also asked for drivers to stay off firefighter’s hoses, after passing vehicles had driven over firefighter’s lines during the early moments of the incident.

“That can be very dangerous, and challenging for our firefighters,” said Schreiner.

“As the vehicles are crossing the hose line, they can rupture the hose, or burn right through it with their exhaust system. If that were to happen while firefighters are in a burning building, they can be out of water.”

Schreiner said the hose used on Tuesday was “fairly large” and difficult to get over, but many drivers tried. He didn’t know whether the drivers were residents or passing through the area, but a few looked “pretty sheepish” as they drove over the hose.

He plans to pass on dashcam footage from the scene to police.