One man missing after three-house fire in Cumberland 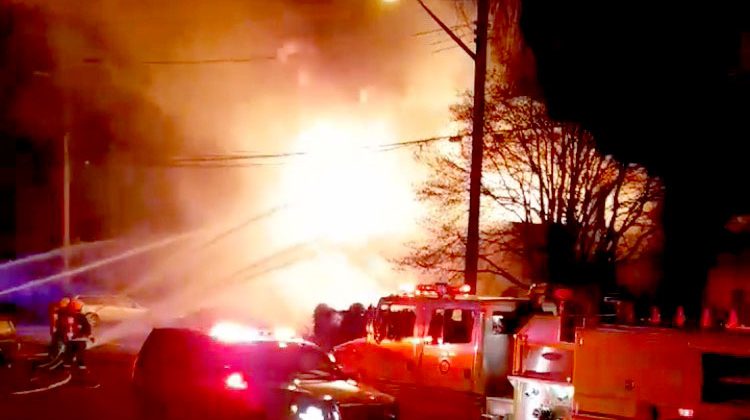 CUMBERLAND, B.C- An intense fire in Cumberland has destroyed one home, and badly damaged two others.

According to Craig Windley, Deputy Fire Chief for the Cumberland Fire Department, the home where the fire started was “fully involved” when fire crews were called out to the scene around 3 a.m. on Saturday morning.

The blaze had taken place in the 2700 block of Penrith Avenue, near the centre of the village.

The flames consumed the first home, spreading to the nearby houses on either side. Windley indicated the house to the east lost its roof, as well as the house to the west. Two cars parked nearby also caught fire, with hydro lines overhead being “burnt off”.

Mutual aid from Courtenay was called in to help fight the flames, with around 16 to 20 firefighters responding to the scene in total. By the early afternoon, crews were still putting out hot spots on the smoking remains of the first home.

One man is “unaccounted for” after the fire, according to Windley.

“We just don’t know where he is,” said Windley.

“We’re hoping he’s with family and friends, but at this time, we don’t know. It’s an RCMP investigation as well at this time.”

Yellow police tape was cordoning off the area while fire crews worked the morning after. As of 12:30 p.m, a Comox Valley RCMP cruiser remained in the area, with two officers examining the damaged homes. Once the scene is under control, Windley indicated the firefighters would turn over control to the RCMP.

“The crews did a great job, knocking it down,” said Windley.