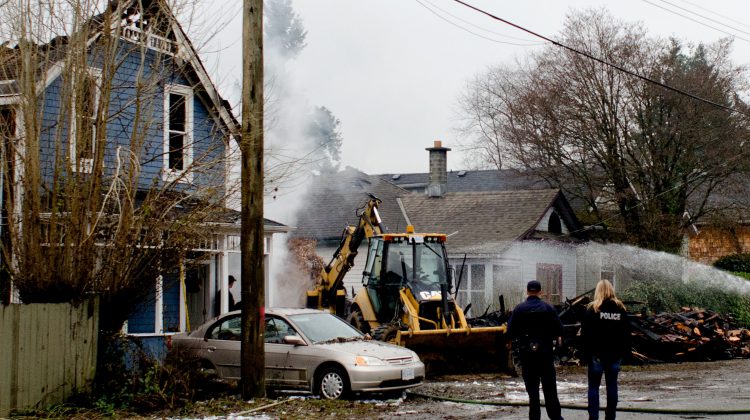 CUMBERLAND, B.C- A man listed as missing after a destructive fire in Cumberland is deceased, according to a close family friend.

The friend of the deceased man made a posting to local social media on Saturday night, stating the man had passed away. No official information from the Cumberland Fire Department on the cause of the fire has been released, and no official statement from the RCMP has been issued on the man’s identity.

Fire crews had been called out to the scene around 3 a.m. on Saturday morning.

The blaze took place in the 2700 block of Penrith Avenue, near the centre of the village.

The flames consumed the home where the fire started, spreading to the nearby houses on either side. Both lost their roofs, while two cars parked nearby also caught fire. Hydro lines overhead were “burnt off”, according to Craig Windley, Deputy Fire Chief for the Cumberland Fire Department.

By early Saturday afternoon, crews were still putting out hot spots on the smoking remains of the first home.
The man had been “unaccounted for” after the fire, according to Windley, who spoke with 98.9 The Goat earlier on Saturday.

“We just don’t know where he is,” said Windley, at the time.

“We’re hoping he’s with family and friends, but at this time, we don’t know. It’s an RCMP investigation as well at this time.”

Yellow police tape was cordoning off the area while fire crews worked. According to a homeowner in the area, police officers took over the scene once firefighters put out the last of the hot spots.

As more information becomes available, it will be added to this report.