RCMP inspector not wavering on Christmas truck shut down 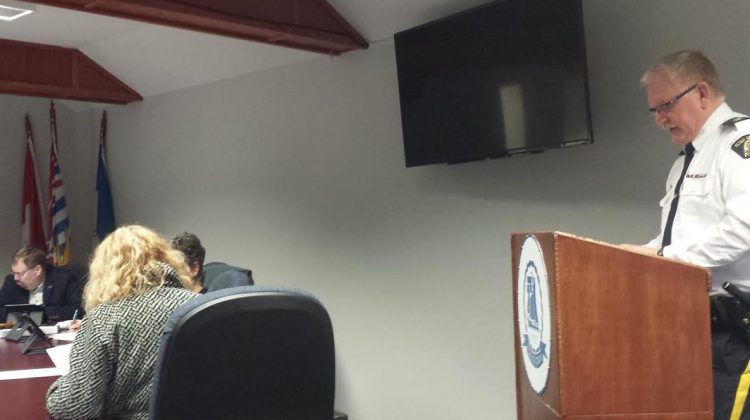 Comox Valley RCMP Inspector Tim Walton speaks to Comox council about the shut down of the annual Comox Valley Christmas trucks on December 13, 2017. Photo by Justin Goulet/98.9 The Goat/Vista Radio

COMOX, B.C.- The RCMP is standing firm on its decision to shut down the Comox Valley Christmas trucks.

Last Friday, one of the trucks was pulled over by an RCMP officer. The driver was told that the lights were distracting and was issued a warning.

According to RCMP Constable Rob Gardner, the distracting lights are a violation of the Motor Vehicle Act.

At Wednesday night’s Comox council meeting, RCMP Inspector Tim Walton stood by the detachment’s decision, after owners of the holiday trucks raised a number of questions over the past few days.

“I think that it’s just a case where you could give them a call, or they phone you, a solution would probably be the best way,” said Comox councillor Ken Grant.

“We have had direct contact with some of the people and a couple of the drivers in particular,” Inspector Walton said.

Erin Kaetler, who owns one of the holiday trucks, submitted a letter to council.

The letter stated that owners of the trucks “understand that officers have a job to do and (we) fully respect their concern with the lights on the busy main roads.” 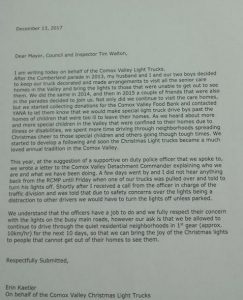 A letter was submitted to Comox council by Erin Kaetler, an owner of one of the Christmas trucks.

Owners asked that trucks be allowed to drive through quiet neighborhoods in first gear (approx. 10 km/hr) for the next ten days leading up to Christmas.

The Comox Valley RCMP has yet to respond to this request.