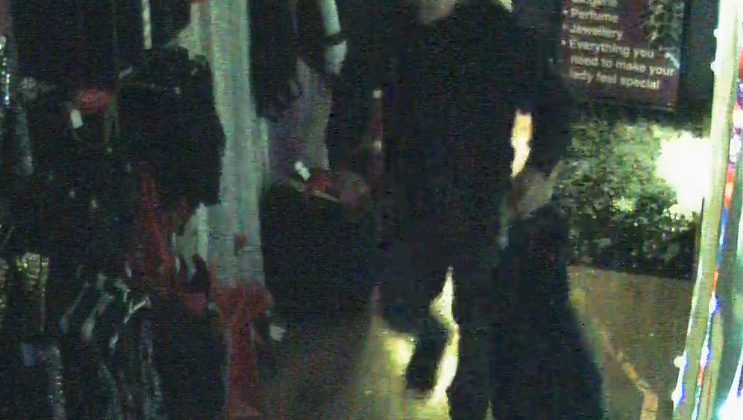 A still from security footage provided by Sexy Kitten Boutique.

COURTENAY, B.C- A large sex toy has gone missing in the Comox Valley.

The toy was the sole item stolen in a break-in early Wednesday morning at the Sexy Kitten Boutique in Courtenay, along Cliffe Avenue. According to store owner Janel Debalinhard, the suspect was a known customer of the shop.

Debalinhard described the man to 98.9 The Goat on Friday afternoon, and said he is in his 60’s. He had given his first name as Steven, walked with a slight limp and spoke with a British accent. Debalinhard also said he’s known to walk along Cliffe Avenue and on the Airpark trails, near the mouth of the Courtenay River.

Security footage from the night of the break-in showed the man breaking through the front door of the shop with what appeared to be a hammer, making his way to the back of the store.

“He was looking for one particular item,” said Debalinhard.

“He managed to grab it, and leave out the front door, but he came back a few seconds later and decided to search around, because he grabbed the wrong one. I happened to sell that item earlier that day.”

After failing to find what he was looking for, Debalinhard indicated that the man left the area, dropping some stolen underwear in front of the Money Mart nearby. She hasn’t seen him since, and will be upgrading her store’s security measures.

The exact reason why the man stole one particular item remains unclear, but Debalinhard said he had come in to examine his target earlier in the week.

“He came in the other afternoon, and he was acting very strange,” said Debalinhard.

“He came to look at the box, he opened it up and did some little measurements, and then he proceeded to take off quickly, and said ‘he would be back’.”

She has reported the theft to police, who she said were shocked by the incident.

“He had an opportunity to take many things in my store, and he only took the (particular item),” said Debalinhard.

“That is it. We have a lot of cameras, and that is all he took.”

She did have a message for the would-be thief.

98.9 The Goat has reached out to the RCMP for comment on the theft, but has not yet received a reply.