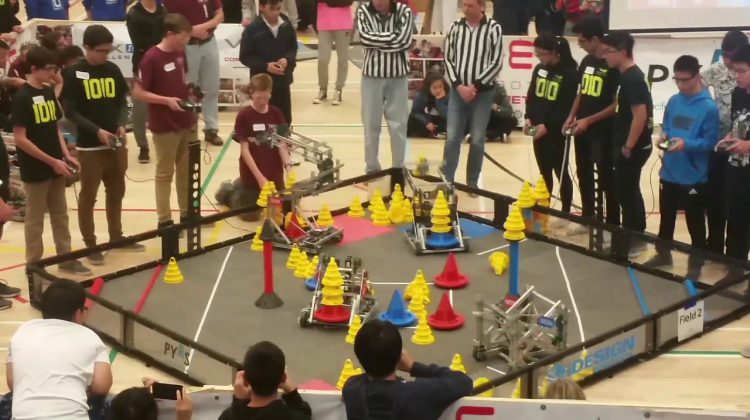 COMOX, B.C.- 49 teams from across Vancouver Island and the Lower Mainland will descend upon the Comox Valley this weekend.

“You have a robot that has been designed by kids, and it has to complete a specific challenge,” said Steve Claassen, Electronics/Robotics and Wood Engineering teacher at Mark R. Isfeld.

“This year’s challenge is called ‘In the Zone’, and basically there’s whole bunch of yellow cones that they have to stack on to goals and then score them into corners.”

The robot that scores the most points wins the round, Eventually, teams go into a playoff run to compete for the championship.

The winning team will earn a spot at the provincial tournament at BCIT in March.

Claassen said students have been working on their robots and strategies since September.

“Teams have gone to a couple of competitions already throughout the Lower Mainland and Vancouver Island,” he said.

During Saturday’s competition, each round will last two minutes.

“For 15 seconds, there’s going to be what’s called autonomous mode, where the robot has to do everything on its own.”

For the other minute and 45 seconds, the robots will be controlled by student drivers.

Claassen said come the end of the playoff round, three teams will team up in an alliance and compete against another three team alliance.

The final winning team, as well as the runner-up crew, will make it to provincials. The event takes place at Highland Secondary from 9:30 a.m. to 3:30 p.m.

Vex Robotics is a worldwide competition that hosts over 3400 events during the season. The world championship will be held in Louisiana in April.

A video from last year’s tournament can be seen through this link.