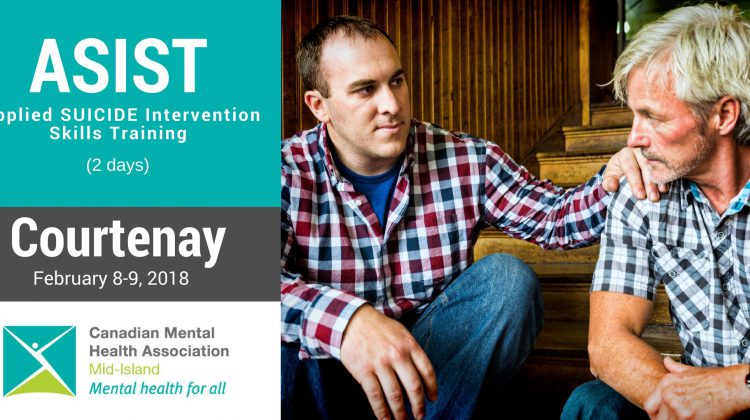 COURTENAY, B.C.- The Canadian Mental Health Association is once against hosting a couple of suicide prevention courses in the Comox Valley.

The Mid-Island branch is teaming up with the ServiceAbility Training Program for a safeTALK suicide prevention workshop on January 23rd in Courtenay.

The half-day seminar will teach participants how to:

“This will be the third safeTALK we have done in less than a year (in Courtenay), and we have done two ASIST training (courses) as well.”

ASIST stands for Applied Suicide Intervention Skills Training. It’s essentially an expansion of safeTALK and is spread out over two days.

“This one gets more detailed and teaches you how to become one of the life-saving resources.”

“Every three days, someone on Vancouver Island dies by suicide,” she explained.

The February 8-9th ASIST course is the second time it has run in Courtenay. The two-day program is in partnership with the Comox Valley Transition Society.

“The reason we are doing this training in the first place is that in 2015, the provincial government set a goal of training 20,000 in suicide prevention,” said Swan.

“They (the province) gave the Canadian Mental Health Association to deliver that training, so right now, we are going all over Vancouver Island doing suicide prevention training.”

Swan noted that the Association covers from Ladysmith to the Comox Valley.

In addition, they also do work through the suicide prevention in other areas of the Island, including Victoria, Tofino and Port Hardy.

She said they also provide training on the smaller islands, like Quadra, as well as Powell River.