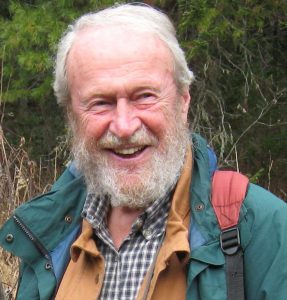 Dr. John Bindernagel is pictured in a photo from his website.

COURTENAY, B.C- A well known biologist and Sasquatch researcher in the Comox Valley has passed away.

According to his friends, 76 year old John Bindernagel died of natural causes on Jan. 17, 2018.

Bindernagel was a wildlife biologist since 1963, publishing a book entitled North America’s Great Ape: the Sasquatch in 1998, followed by The Discovery of Bigfoot in 2010.

He was originally from Ontario, and moved to British Columbia in the 70’s due to the many sightings of Bigfoot in the province. He collected casts of what he believed to be the creature’s tracks, and also claimed to have heard the animal’s sound near Comox Lake back in 1992.

A friend of Bindernagel, Blaine McMillan, commented on 98.9 the Goat’s post concerning the biologist’s passing.

“Dr. Bindernagel will be greatly missed in the sasquatch researching community,” wrote McMillan.

“John was a wealth of knowledge that he shared with everyone and always took time to listen to everyone’s sasquatch experiences. He had attended the 2007 BFRO expedition on Vancouver Island. Thank you, John, for your assistance and guidance in my own investigations.”

An obituary of Bindernagel can be found here: http://www.cryptozoonews.com/bindernagel-obit/