City to bring in “Oops” stickers for problem recyclers 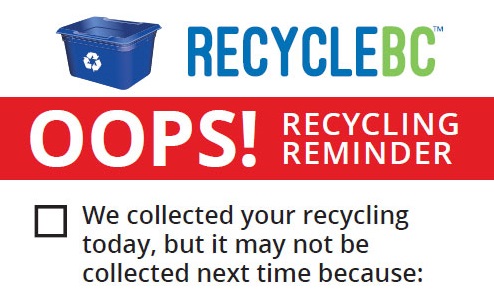 The top of the sticker, image supplied by the City of Courtenay.

The municipal government has announced a new practice by the city’s recycling contractor, which will see new stickers placed in recycling bins that have unaccepted material inside.

“We know Courtenay residents are avid recyclers,” said Kyle Shaw, the City of Courtenay’s Manager of Transportation and Utilities – Maintenance, in the release.

“Our goal is to help people recycle, reduce overall contamination rates and keep more materials out of the landfill.”

The city was recognized back in 2016 for one of the lowest contamination rates in British Columbia, but according to the news release, the rates are on the rise. Nine per cent of materials found in the bins in 2017 were considered non-recyclable, exceeding the provincial maximum of three per cent.

The high level could cause fines for the city.

Plastic bags, overwrap, foam packaging, and glass are recyclable, but need to be dropped off at the Courtenay Return Centre on Puntledge Road, or other Recycle BC locations.

A link to those locations can be found at www.cwsm.ca/depots.