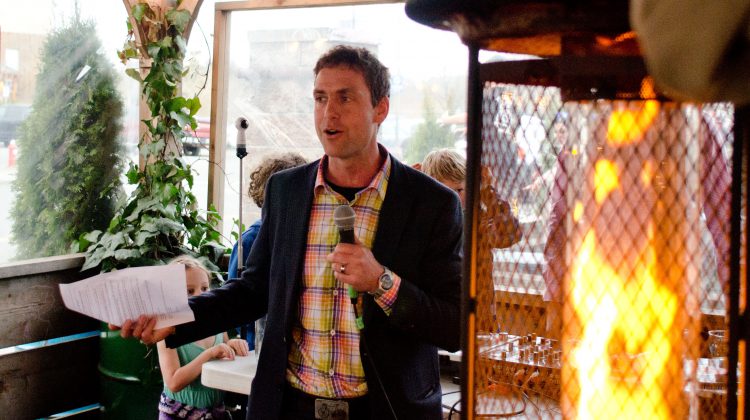 COURTENAY, B.C- One of the three declared candidates for the mayor’s chair in Courtenay has picked up his first endorsement.

Yesterday evening, Councillor David Frisch celebrated his official mayoral campaign launch at Gladstone Brewing Company. The event took place on the brewery’s patio, with close to a full house present to mark the occasion with Frisch.

One of the attendee’s was Councillor Doug Hillian, who voiced his support for Frisch’s mayoral bid.

“I think what his candidacy represents is the next generation of leadership in the Valley,” said Hillian.

“I have no hesitancy in supporting David’s bid, so I’m here tonight to basically show that support.”

“I think he’s got some good ideas for the community,” said Hillian.

“He’s got a good mix of business sense, and experience, along with the social conscience and a fresh approach to a lot of issues. I’ve been impressed with his understanding of the issues, his ability to engage with people, and I think that he will learn and grown and develop. If he gains the confidence of the community, I think he could do a good job as the mayor.”

As for his own plans for upcoming municipal elections, Hillian was “90 per cent sure” he would be running again.

“There is always personal factors that influence that decision. I probably won’t make up my mind 100 per cent for a couple of months, and then it’s up to the people.”

Frisch gave a short speech during his launch, laying more of his priorities for the coming election. According to the address, he’ll be focusing on issues of urban planning, transport, and economic growth, with a focus on improving urban centres such as the downtown and East Courtenay.

“What we need to do is foster those urban centres, because it will create a unique sense of community,” said Frisch.

“It’ll give us a range of affordable housing, it’ll give us lower taxes, and a range of transportation options. It’ll help us preserve nature, and support good health.”

Frisch noted he wanted to encourage people to live downtown, have smaller homes, and have carriage houses and granny flats thought of as “just normal”.

“Your kids can walk, and bike safely to school. Imagine if people have real opportunity to use buses because they come every 15 minutes, not every hour or two. And imagine roads that are not gridlocked, because people have other options to travel. That’s what smart growth is all about.”

Frisch is one of three declared mayoral candidates for Courtenay, with the other two being councillors Bob Wells and Erik Erickson. Incumbent mayor Larry Jangula and Councillor Rebecca Lennox have not yet declared their intentions.