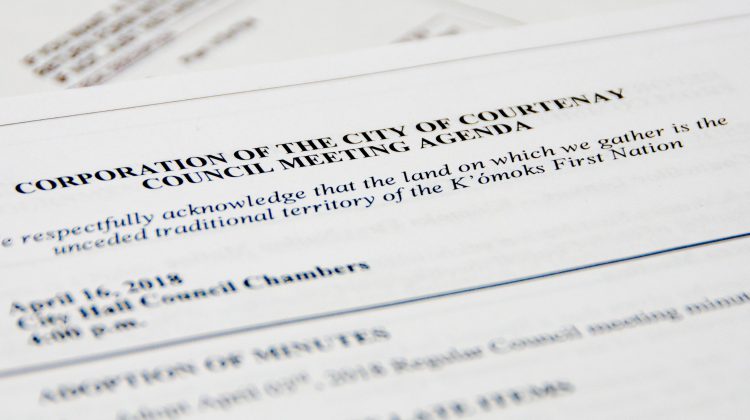 The statement, as written in the council agenda for April 16, 2018. Photo by James Wood/98.9 The Goat/Vista Radio

COURTENAY, B.C- The practice of territorial acknowledgement at Courtenay City Hall is getting one more step added.

As of April 3, council had approved a move to include the following statement on the first pages of all council meeting agendas and committee of the whole agendas;

“We respectfully acknowledge that the land on which we gather is the unceded traditional territory of the K’ómoks First Nation.”

The policy was first brought up by Councillor Rebecca Lennox on March 19, and was passed by council in one meeting. The exact form of the acknowledgement was approved on April 3.

On April 16, council was asked to pass a resolution for the statement to be read aloud at the start of each council meeting, as well as the committee of the whole meetings. The resolution passed without opposition.

“We’re quite happy that it’s written on our letterhead, as Comox has done the same thing,” said Mayor Larry Jangula.