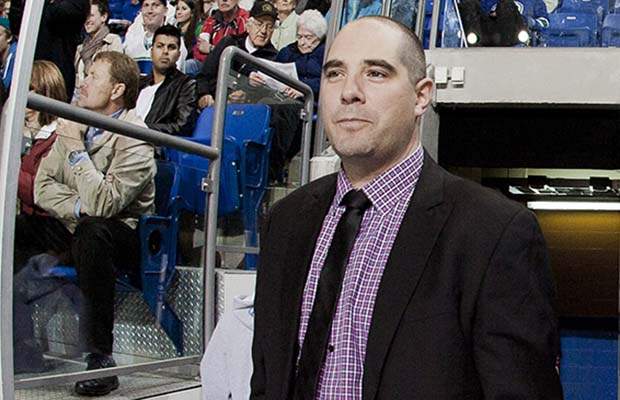 Tyler Kuntz has been hired as the new Head Coach and GM of the Powell River Kings. Photo courtesy PR Kings.

The BCHL team has hired Tyler Kuntz as Head Coach and General Manager. The 39-year-old served as the Assistant Coach for the Daemyung Killer Whales in South Korea last season.

He’s also served as an assistant with the WHL’s Vancouver Giants (2015-2017) and the University of British Columbia (UBC) Thunderbirds, where he was promoted to Head Coach after four years with the team.

Under the guidance of former Vancouver Canucks coach Willie Desjardins, Kuntz ran the NHL team’s pre-season training camp on ice sessions in 2014 and 2016.

Not only does Kuntz have coaching experience, he played the game for many years. During the 1998-1999 season, he patrolled the blue line with the BCHL’s Burnaby (now Alberni Valley) Bulldogs.

He followed that up with five years at UBC. There, he earned a Bachelor of Education and went on to play professionally in Europe and throughout North America.

“Over the last 10 years, I’ve coached and worked with a lot of former Kings and followed the team closely. I know it’s always had a reputation of a good program, always competitive, always have good players and it’s nice to go somewhere with a history of success,” Kuntz said in a release issued by the Kings.

He said fans can expect a well prepared team ready to play hard every night.

“You have to be detailed, create good work habits and with 95 per cent of the game being played without the puck, you really have to teach where to go when players don’t have the puck so they can go get it as quick as they can,” he said.

“Then on transition you have to be really quick, and have a quick mind.”

Kuntz’s first goal will be to become acquainted with the team’s staff, and then oversee the Kings’ Spring Camp in Kamloops on May 11th through 13th.

“Through the interview process we felt Tyler has a vision for the players and the program that was in line with our vision,” said Kings President Rob Villani, in the team’s release.

“Tyler’s philosophy of developing players on and off the ice and developing them within the community is of utmost importance to him. We believe Tyler knows how vital the team is to our community and we are confident he is the right choice to lead us in the future.”

The Kings will unveil Kuntz at a special ceremony on Thursday, May 3rd at 10:00 a.m. Fans will be able to meet Kuntz, and the team’s Board of Directors.