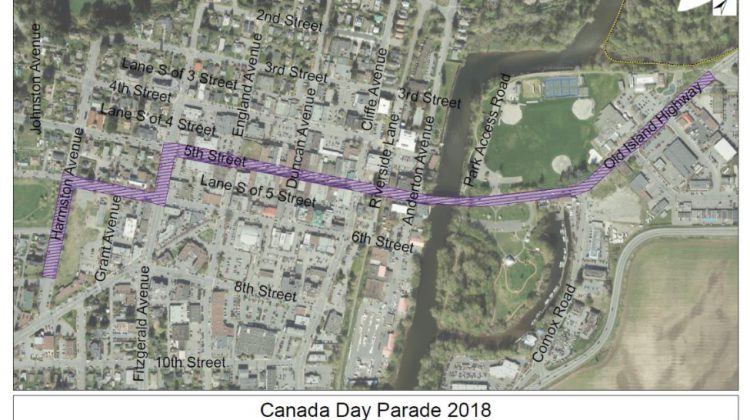 A map of the planned route, sourced from agenda documents.

COURTENAY, B.C- The annual Canada Day parade will be taking some detours in 2018.

Due to the ongoing roadwork along 5th Street in Courtenay, the city’s annual parade will be following a different path. The need for a change was first discussed while council was giving final approval to the roadwork and referred back to municipal staff to find alternate routes.

On Tuesday evening, council will look at the revised route. While it usually started at Lake Trail School and proceeded along the road to end at the Lewis Centre parking lot, the roadwork blocks the traditional path.

Instead, the route would start along Harmston Avenue, close to the Old Church Theatre. It would proceed up to 6th Street, turning east, and then turning north up to the intersection of 5th Street and Fitzgerald Avenue.

It would then turn east again and resume the rest of the normal route to the Lewis Centre.

The plan has the support of downtown businesses, and the group organizing the city’s Canada Day events. Council will discuss the matter tonight.