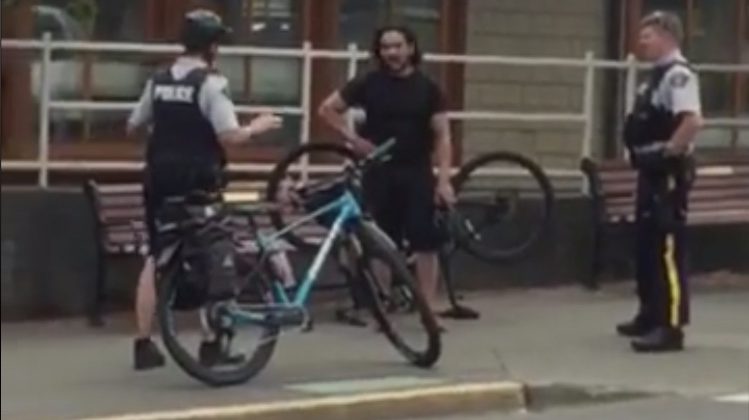 A screenshot of the video, showing the confrontation. Image sourced from Facebook.

In the video, a man is shown outside the Courtenay library being spoken to by two police officers, with one wearing a bicycle helmet and bike shorts. A police cruiser is parked nearby, close to the crosswalk leading to the library.

The roughly seven-minute long video shows the discussion between the two officers and the man becoming more heated, after the man disagrees with what appears to be a ticket being issued to him for a traffic violation, which was riding his bike without his hands on the handle bars.

A third officer shows up during the discussion, which ended peacefully. The man was handed a ticket by the officer wearing the bicycle helmet, and the video ends.

The MyComoxValleyNow.com newsroom reached out to the woman who filmed the video, whose name was listed as AD Grace on Facebook.

According to Grace, the incident began in the afternoon. She was at work nearby, and heard raised voices, starting to film after she saw the officer with the bike helmet speaking with the man.

“I started recording just in case anything happened,” said Grace, in a written message to the newsroom.

“I opened the window to have a better understanding as to what was going on, throughout the encounter I was so scared for that guy.”

Grace told MyComoxValleyNow that the bicycle officer was intimidating the man, and the officers were trying to provoke the man through their “energy and stature”.

“In my point of view this is absolutely harassment and bullying,” wrote Grace.

“They were pretty mean and aggressive with their tone and energy over such a small incident.”

Grace believed the incident would have unfolded better if a warning had been issued, instead of a ticket.

When posted online, the video attracted hundreds of comments, with the majority being negative in the wake of the incident.

Reached for comment on the matter, the Comox Valley RCMP supplied the following statement.

“We are aware of the video that was posted to Facebook.  The video did not capture what led up to the police interaction in front of the library. The man receiving the violation ticket may dispute it and more information about the encounter would be entered as evidence in court.”

The MyComoxValleyNow.com newsroom has reached out to the man believed to be pictured in the video, but has not yet heard back.