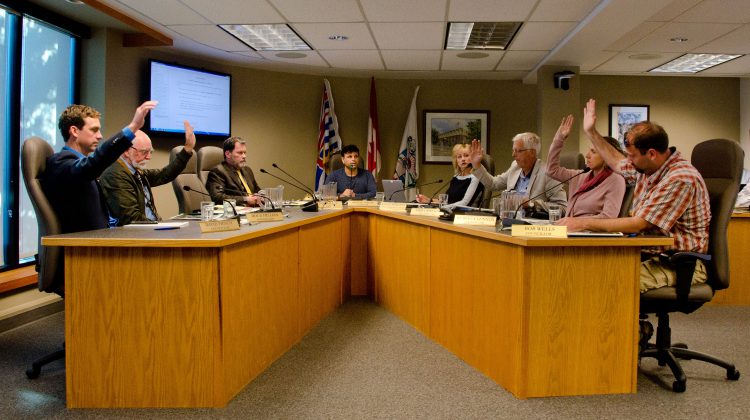 Courtenay city council is pictured during the final vote on the 8th Street housing project on the evening of June 11th, 2018. Photo by James Wood/98.9 The Goat/Vista Radio

COURTENAY, B.C- A supportive housing project in west-end Courtenay has the green light from council.

The rezoning for the project was approved without opposition on Monday evening, after discussion amongst council about opposition to the building and the need to address homelessness in Courtenay.

During the discussion, Councillor Doug Hillian spoke at length in favour of the project, growing emotional towards the end of his speech. While he indicated that he understood the concerns from residents about the project, he believed the opportunity for the municipal government to help the homeless couldn’t be missed.

A public hearing on the project was held last month, which saw multiple residents of the area expressing concerns about drug use and aggression in the area. The site is in a patch of vacant land, next to the city’s work yard.

The current presence of the Salvation Army shelter and the Comox Valley Recovery Centre was mentioned as a factor by those opposed, who voiced a desire to see supportive housing distributed throughout the city, instead of being concentrated in one area.

“I take very seriously the concerns expressed by the people in the neighbourhood,” said Hillian.

“I think they’re valid concerns, and I think we’re asking a lot of this neighbourhood. For me, the more compelling cause is the fact that we have people on our streets who don’t have a place to live. They’re elderly people, they’re people in middle age, they’re young people. We haven’t been able to respond to that in this manner. So I’m gratified we have the opportunity to respond.”

Council also touched on concerns about a fast approval process for the project, with Hillian mentioning a lack of land that would fit the project beyond the chosen site.

“The reality is that the City does not own unlimited amounts of land,” said Hillian, during discussion.

The project will feature 46 modular units, with 24 hour supportive services. The province and BC Housing are working with the city government on the project, while the area’s John Howard Society chapter will operate the facility and provide services.

Hillian expected BC Housing and the John Howard Society to begin consultations with residents in the near future.