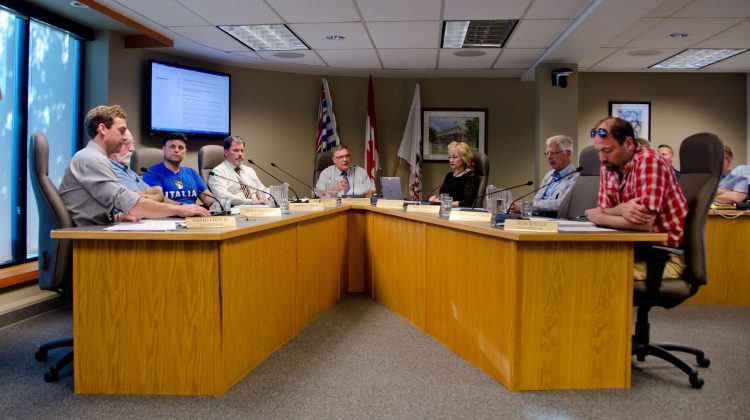 Courtenay city council is pictured during their meeting on June 18th, 2018. Photo by James Wood/98.9 The Goat/Vista Radio

COURTENAY, B.C- A group of home owners in the Comox Valley won’t seeing any changes to the way they get billed in the near future.

Earlier this year, residents of the Woodlands, a strata home development near Lerwick Nature Park in Courtenay, asked for a change to the way they receive bills for city services.

Due to the Woodlands development being run by a strata corporation, all bills for Courtenay’s city services such as water, garbage collection, and sewer fees are sent to the corporation for payment, instead of individual home owners.

According to Thomas, who spoke with MyComoxValleyNow.com after his presentation, the system has resulted in residents of the area paying higher rates for such services due to the strata corporation multiplying the costs, based on “unit entitlement”, which is the system that pays for common expenses.

The concern of the residents was that they are currently paying higher rates on city services for their individual properties, based on the size, due to those bills being sent to the corporation by the municipal government. They were asking for the system to be changed to allow for individual billing.

“We have owners paying what amounts to almost double of what the city and the region has decided that water should cost, and that’s not fair,” said Thomas, after his presentation.

He mentioned during the presentation that Comox already did direct billing of strata residents for city services, which Comox mayor Paul Ives previously confirmed.

On Monday, council debated what to do about the issue, with numerous options being weighed. However, it was decided to keep the current billing system in place, and leave the issue up to the province to decide.

“I hope the stata owners will understand, because I know they were emotional, I know they were upset, and I know a lot of them were concerned about it, but we have taken steps to try to clarify it, we have taken steps to have the province change the legislation, and that will be discussed in September, at the Union of BC Municipalities (UCBM) convention,” said Mayor Larry Jangula, following the meeting.

Jangula stated that any changes with the way Courtenay does strata billing would be a “huge, extra cost”, and said municipal staff were telling him the province was “tying their hands”.

The next meeting of the UCBM will be held from September 10 to 14 in Whistler.