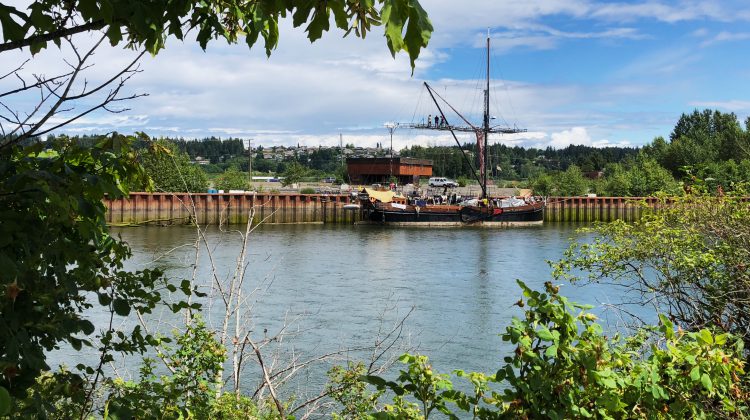 The Amara Zee, which houses the Nomadic Tempest Tall Ship theatre show is pictured while moored at the Kus-Kus-Sum waterfront on June 25th, 2018. Photo by James Wood/98.9 The Goat/Vista Radio

COURTENAY, B.C- An agreement laying out the purchase and restoration of the former Field Sawmill site has been put together this week.

According to Courtenay’s city council agenda for June 25th, a memorandum of understanding (MOU) between the city, Project Watershed, and K’ómoks First Nation was drawn up with the intention of leasing, purchasing, and restoring the vacant site, which used to house a K’ómoks village. It was most recently used as for the Field Sawmill operation by Interfor.

The restoration would remove the currently abandoned industrial remnants at the site, and change it back to estuary land.

It remains zoned for industrial use, and the purchase of the site by Project Watershed is estimated to cost around $6.3 million dollars.

Council has provided a grant from gaming funds to Project Watershed, who is using the funds to reimburse Interfor, for an amount equivalent to property taxes.

“This restoration will bring significant aesthetic, recreational, environmental and economic benefit to the City in the form of flood mitigation, new park land with walking and cycling trails, and restored fish habitat”, read part of a motion dealing with the site in 2017.

According to the MOU, a hard agreement for purchase of the site is planned to be put together by August 1st, with eventual ownership and land management to be held between the City of Courtenay and K’ómoks First Nation. A section of the MOU dealing with ownership, included in the June 25 council agenda. A section of the MOU dealing with the purchase timeline, included in the June 25 council agenda.

The city also provided $135,000 to Project Watershed on June 20th, which was previously planned, and has given $5000 towards the Nomadic Tempest concert at the site. The Nomadic Tempest Tall Ship is currently moored at the Kus-Kus-Sum waterfront, with the benefit concert to be held from June 29th to July 1st.

When the MOU came up at council on Monday evening, council decided to approve the agreement. After the item was moved by Councillor Bob Wells and seconded by Councillor Doug Hillian, Courtenay city manager David Allen indicated that the date of August 1st for a hard agreement could be moved.

The cost of purchasing the site would also be undertaken by Project Watershed, and the signing of the MOU did not come with a financial obligation for the city.

Mayor Larry Jangula indicated one of his major concerns about the proposal was ensuring the city government wasn’t responsible for any of the costs of the purchase. However, he was positive about progress being made on the Kus-Kus-Sum project.

“I think it will be a lot of benefit,” said Jangula.

“Does the cost outweigh it? What I hear on the street, I don’t know. I think it will be. The community will have access, to my understanding, there will be waterways and walkways and green spaces, which of course are never a bad thing, especially along a river estuary.”

He also mentioned that the property could be useful for industry.

“I hear a lot from people, that it’s Courtenay’s only piece of industrial property they have, and it could generate jobs, etcetera,” said Jangula.

“I think in light of the fact that it’s been vacant for so long, it would be very difficult, probably art this time, to initiate or start up any form of an industrial operation in that area.”

He was opposed to the city bearing any cost of the eventual land purchase.

NOTE: This story earlier said that the city would exempt the site from property taxes during a two-year lease period. This error has been corrected.