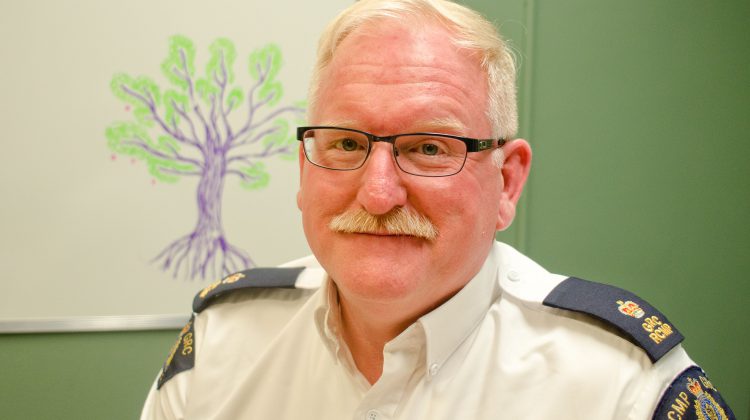 Inspector Tim Walton is pictured in a photo at the detachment on July 18th, 2018. Photo by James Wood/98.9 The Goat/Vista Radio

Walton has been serving as the head of the Comox Valley RCMP for the past four years, and news of a transfer to Victoria came in early July. He’ll be heading south to Victoria, in order to take charge of traffic services across Vancouver Island.

In an interview with the MyComoxValleyNow.com newsroom, Walton said that the departure from the Valley would be the hardest one yet in his long career, which has seen him live in seven different provinces.

“I asked for it (the transfer),” said Walton.

“The Comox Valley is a very tough place to leave, but there’s other things to do, other challenges and opportunities. Victoria’s the place right now, my next step. This is move number nine.”

Walton didn’t detail how long ago he had asked for the transfer, and indicated the move from leading a community detachment to traffic will be a new area for him.

“I’m fresh off the boat, when it comes to traffic,” said Walton.

“We all write tickets, we’ve been writing tickets since we got into the world of policing, it’s one of those things you learn, a self generate file. Sometimes a traffic ticket or a stop leads to lots of other things. There’s lots more out there than writing tickets for speeding. There’s a lot more criminal activity happening in vehicles, most of it is attached to a vehicle.”

He also expanded on why the move from the Valley would be difficult, mentioning connections his family had made.

“This will be the toughest place to leave,” said Walton.

“The community is fantastic. I can’t brag about our office building, but ignoring that, I have two daughters, both have had fantastic teachers at Ecole Robb Road Elementary School and at Mark R. Isfeld Senior Secondary School. I’ve got one of them involved in soccer, and the coaching staff in the Comox Valley, I’ve never seen it as good as it is here.”

“It’s a direct impact on the family, and when I told my youngest daughter that we were leaving, that was one of the first thoughts that she expressed to us, was that she’d have to leave her soccer friends,” said Walton.

“There’s lots of good stuff here. Look around, and you have to pinch yourself that this is actually real. It’s a fantastic place to live.”

He plans on returning to visit. As for advice for the next head of the detachment, Walton recomdned that they listen to their officers.

“Trust your people, and make your own mind up,” said Walton.

“I’ve got my ideas, but it’s someone else’s shop shortly, and sometimes it’s easier to start with a blank slate. We’ve got fantastic people here that do fantastic things every day. People are saving lives, on a monthly basis I hear something that one of the members here has done.”

He believed that the detachment has made progress on dealing with community issues, mentioning more collaboration with municipal authourities and local agencies. He touched specifically on the topic of nuisance properties, which have sprung up during the summer.

According to Walton, the municipal administrations of both Courtenay and Comox have been in touch with the detachment on the matter, and have expressed openness to working with the police.

As for any regrets from the past four years, or changes that he would make, Walton did not have anything specific in mind.

“I know it sounds corny. You learn something new every day here. If I could have performed miracles, we’d be looking at a new building by now, but I’m not a miracle worker. We made a lot of progress in a lot of other things. You do what you can do in the time that you’ve got, and you leave the place hopefully in as good or a better situation then you found it. We all build on each other’s successes.”

He had a focus on “getting the job done” at the end of the day.

“For our members, it’s getting them home safely after a 12 hour shift,” said Walton.

“Luckily I haven’t had to go to the hospital many times to see members injured on the job. Luckily, we have not lost anybody here. That’s the kind of stuff in my position, that’s the phone call you don’t want.”

Walton didn’t have a timeline for his exit, saying it depended on the sale of his home in the Valley. However, he does plan on doing two more community consultations in August. One will be in the Valley, with another for Hornby Island and Denman Island.

“That will be people’s last kick at the can, and you get a coffee on me,” said Walton.

“You can’t turn that down.”

The policing area for the Valley detachment covers multiple communities, including Cumberland, Comox, Courtenay, K’ómoks First Nation, and both islands.