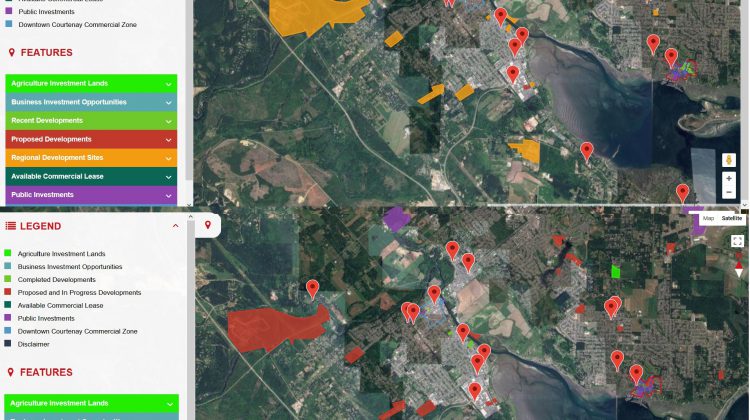 A combined image of the map, with the top dated from July 30th and the bottom dated from August 1st. Image sourced from the Invest Comox Valley website.

COURTENAY, B.C- A local economic development office has changed up its map.

Comox Valley Economic Development, also known as Invest Comox Valley, drew online attention after their map of developments in the valley area included a controversial project near the Stotan Falls.

The organization is publicly funded by local municipalities, with a board of directors drawn from the municipal leadership of Courtenay, Comox, and the Comox Valley Regional District. The Village of Cumberland does not have a representative on the board.

On their map, which is included on the organization’s website, the Stotan Falls development was listed as a “regional development site” instead of a “proposed development”. The official description of the project carried on the site drew on material provided by 3L Developments Inc., the company behind the proposal.

This designation and the description drew anger from local residents opposed to the project, which led to the organization changing their map as of Wednesday afternoon.

The change removed the “regional development site” designation entirely, replacing it with “proposed and in progress”.

Prior to the switch, MyComoxValleyNow.com spoke with Comox mayor Paul Ives, who had been involved in online discussion about the classification.

“I don’t think it’s anything usual, but of course because it’s a contentious issue, I suppose some eyebrows are raised,” said Ives.

“The staff at CVEDS are aware of that, and will be putting a cautionary note on their website. Like any other development that’s being proposed, it needs to go through a land use planning process.”

Ives also said it “may have” been in the wrong category, and stated that economic development “doesn’t take sides” on land-use planning issues.

“Those clearly are within the purview of the appropriate local government,” said Ives.

Lara Greasley, the manager of marketing and communications at Comox Valley Economic Development, indicated that the source material for the map is drawn from third parties, such as local government websites and property listings.

As for the change, she said it was done to “simplify naming conventions”, with the aim of making categories more clear for users of the site.

“As with most websites, they are an ongoing work in progress,” said Greasley.