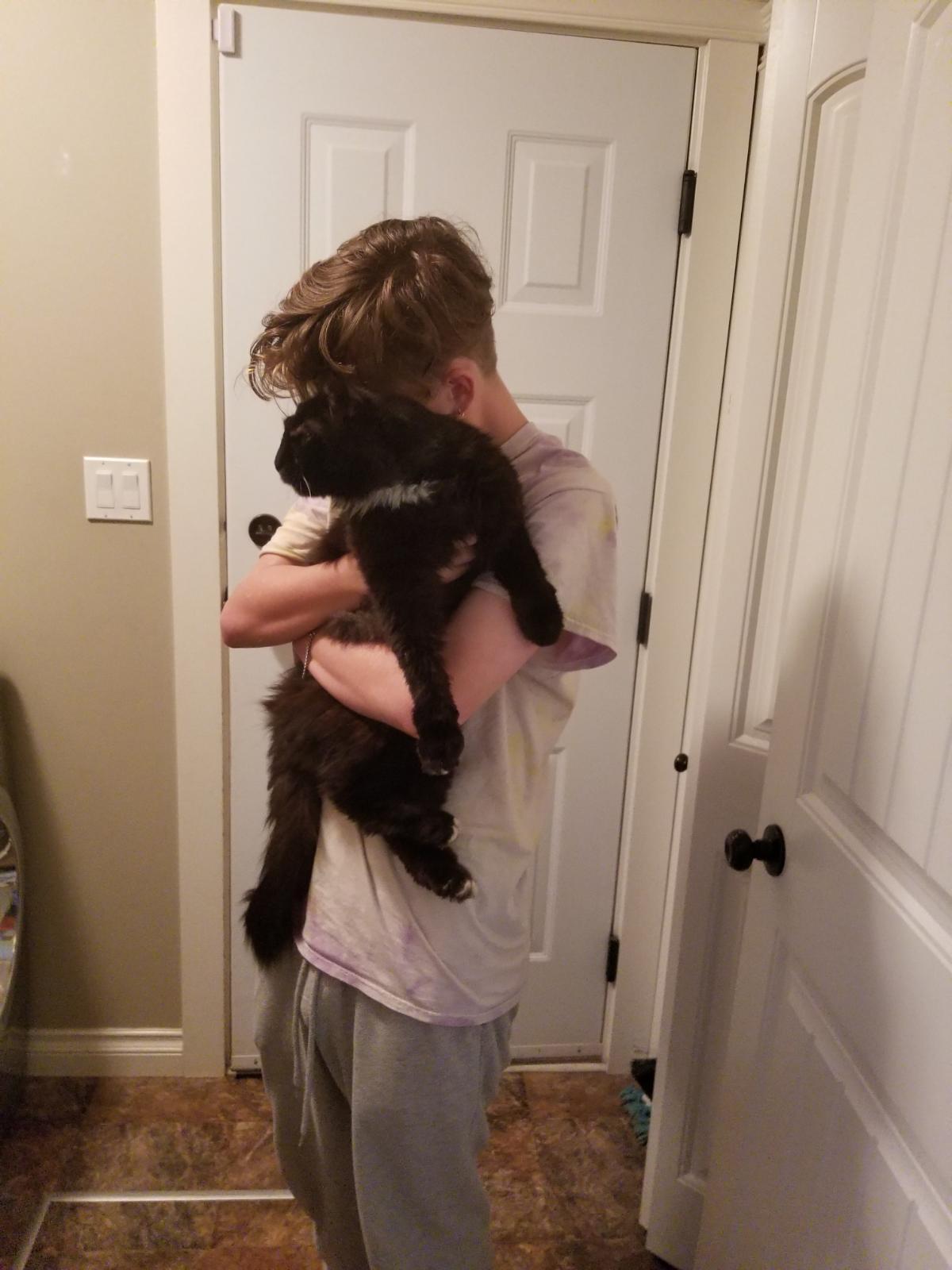 COURTENAY, B.C. – Following a string of apparent cat disappearances in the Comox Valley, a young boy has been reunited with his furry friend.

“Two months ago, we were in touch with a mother whose family cat had gone missing and she wanted tips on how to get her cat back,” he said.

“She tried a few ideas, and nothing was working and this cat was still missing, for two days, three days, a week and it kept going on and on.”

Baker said the fear was that the cat had been trapped and dumped in a wooded area of the Valley, which is something that had happened with other cats in the past.

“We didn’t mention it to the family as the cat was used as a therapy cat for a young boy that is ill, so we didn’t want to stress out the family thinking that this cat was never coming back,” he explained.

Today, this story came to a happy conclusion, as Carlos was reunited with his family.

“We’ve had Carlos in our family for seven years and he’s always been such an amazing animal. He’s more than an animal, he’s a family member,” said Deb Wilson.

“He’s my son’s cat and my son has heart disease and has had several open heart surgeries, and Carlos has sat with him through it all.”

She said Carlos would walk her son, Josh, to the bus stop every day before his disappearance, and losing the cat was devastating for the family and the young man.

Wilson said today was a day filled with mixed emotions.

“I’m absolutely elated that my baby is alive. I’m so saddened that this has happened, I’m angry and I’m concerned that there’s people that live in my neighborhood that would actually do something like this,” she said.

“I can’t imagine that someone would take the time to trap a cat – don’t bother with the SPCA, don’t bother dropping him off at the vet or whatever, but what take the time to drop him off far away, and leave him there knowing that he’s going to die a horrible death.” Fortunately, Carlos’ story saw a positive finale.

“If there’s a cat that’s in your neighborhood that you don’t like, that’s in your garden, that’s jumping on your car, or whatever, call the SPCA, call the Kitty Cat P.A.L.S, call a vet office, call anyone. Just don’t injure an animal, there’s other ways to deal with it,” Wilson added.

Earlier this summer, another Valley resident, Maria Martin’s cat was stolen from her property in the Puntledge area of Courtenay.

“We found that his body was found hit by a car by Mount Washington, in the Dove Creek area, which we later found out is a very popular ‘dumping ground’ where other cats had been found that had been trapped by other people,” she said.

“We soon came to realize that there was somebody trapping cats in our neighborhood, and this person or persons has been trapping cats for many years.”

Martin said efforts have been made to find the person or persons trapping the cats, but so far a culprit has not been found.

“We plan on working together as a team and putting out traps to hopefully find other cats that have been dumped in these popular locations, and either getting them medical attention or reuniting them with their owners,” she said.

“Unfortunately my cat didn’t make it out, and I want to advocate on his behalf and his memory, just to help other people bring awareness to this situation, that this person is out there and there are individuals that know something.”

Martin said the act of trapping is technically legal, but what is being done after the cats are trapped is illegal and not right.

“I’ve heard quite a few instances of cats being trapped and dumped. Kitty Cat P.A.L.S has mentioned that they have rescued cats that have been dumped in these locations after many years of going missing,” she added.

“I haven’t made any reports in regards to my case. There has been in the past, animal rights activist that have reported to the RCMP and SPCA. The problem that they’re finding is that there isn’t any proof of a certain individual who is doing it.”

Baker noted that Martin’s story assisted in the search for Carlos.

“This lead the family to think the same thing had happened to their cat, because they had a feeling that something out of the ordinary had happened,” he said.

Baker noted that Kitty Cat P.A.L.S then notified the family about the reported cat dumpings, and told them they would do everything they could to help the family find Carlos.

“Our volunteers, they were in a very remote wooded area and were driving, and saw a cat in a place where you never see a cat, other than perhaps maybe a cougar. That’s the only wildlife that should be out there,” he said.

“Our trappers got activated and they set up some feeding stations. They would go out morning and night with traps and set them, and check on them. Lo and behold, this morning (Aug. 8), there was a cat in the trap, and it fit the description of Carlos.”

Carlos’ family was contacted and the young boy was reunited with his friend.

Baker said many tears were shed during the reunion.

“It was a very emotional reunion, and it was a happy ending.”

Anyone with further information on the cat trappings and dumpings is asked to contact Kitty Cat P.A.L.S, the SPCA or the RCMP.