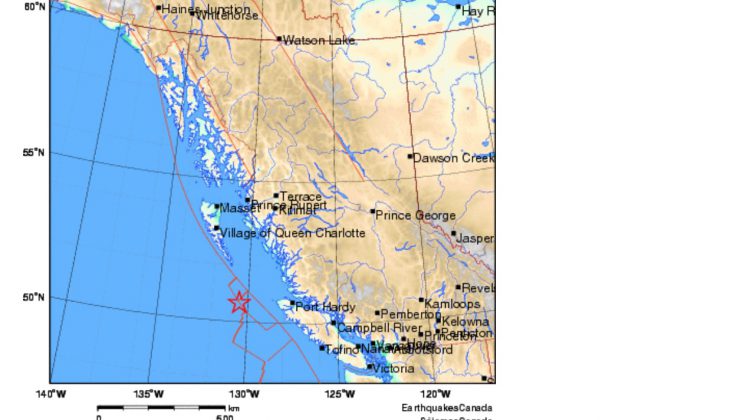 A map from Earthquakes Canada showing the location of the quake felt in Port Hardy on August 21st, 2018.

PORT HARDY, B.C- An early-morning earthquake may have rattled residents in Port Hardy on Tuesday.

According to Earthquakes Canada, the shake came around 6:10 a.m., with the source being around 190 kilometres west of the community on the ocean floor.

Taimi Mulder, a seismologist with Natural Resources Canada, said the zone is forming new oceanic plate, with magma coming up from the mantle and depositing itself on the ocean floor. That process is causing earthquakes.

The quake in question registered a 4.8 on the Richter scale, and was “lightly felt” in Port Hardy.

“It would have been a short, sharp, jerk. It might have rattled a few things, that were loose around the house, but that would be about it.”

She said the quake was nothing too crazy, but a bit eye-opening. She believed it would encourage residents to prepare for a larger quake.

“Emergency Management B.C has a great website on what to do to be prepared, and I encourage everyone to go have a good look at that, and be safe,” said Mulder.

“Be prepared for an earthquake during the winter.”

A 6.2 quake hit off the West Coast this morning, centred off of Oregon, with a 3.5 aftershock. There was no tsunami warning issued, and no reports of damage or injuries.