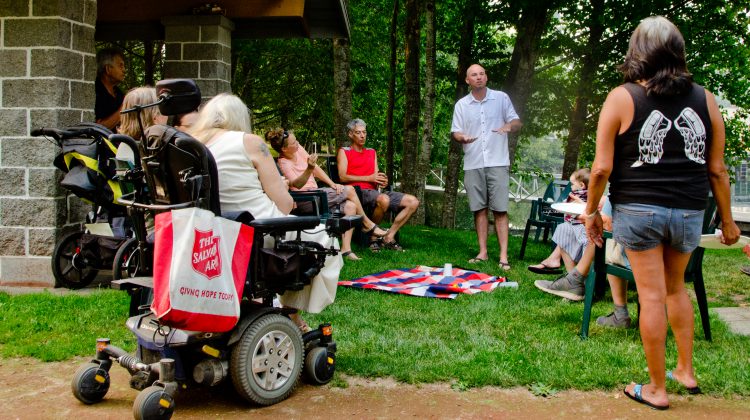 COURTENAY, B.C- Kiyoshi Kosky wants to re-use an empty building in the downtown.

Kosky has lived in the Comox Valley for the past two years, and worked as a manager at a care home for adults. Prior to his time in Courtenay, he worked as an educational assistant in Nanaimo for the local school district, as well as the Sea to Sky school district, spending five years at each post.

He has held elected posts in CUPE, and previously ran for local office in Pemberton in 2014, as well as a bid for the Courtenay-Comox NDP nomination in 2017.

He’s now seeking a seat on Courtenay city council, running on a platform focused on affordable housing, renewable energy, and support for environmental conservation within the community.

One of the main planks of his affordable housing support is the idea of taking the old Thrifty’s building in downtown Courtenay, and taking it into city ownership.

According to Kosky, there is a group in town looking to remake the empty structure into a four-storey building, with space for affordable rental units. A “food hub” and “arts and culture hub” would also be included.

He also wants to see solar panels installed at Courtenay City Hall, and would aim for the projects to be paid for through loans.

“Municipalities are really blessed that we can take loans at around three per cent, a really low interest loan, and then we can do really fantastic stuff with it,” said Kosky.

He stated a solar panel project for City Hall would require $60,000, part of a business case he and another person in the community had worked on.

As for the issue of environmentalism in Courtenay, Kosky had a focus on improving the local air quality.

“We already have particulate in the summertime, as we’re experiencing right here and now, and we have the particulate problem in the wintertime because of all the woodstoves,” said Kosky.

He believed the city could provide support for people to transition from wood stoves over to electric heat pumps, and also wants to see one-time donations made to environmental projects in the Valley, such as the purchase of land around the Morrison Creek headwaters and the restoration of the former Field Sawmill site.

“We know that some people may not have the money,” said Kosky.

“Some people can barely pay their taxes. If we are going to get a solution that people are going to buy into, that have the wood stoves, we’re going to need to come to the table with money and tools.”

Kosky had his official campaign launch on Wednesday afternoon, with a free barbeque and music at Simms Millennium Park. The event drew a cluster of supporters and those curious about the candidate, with a short address by Kosky to those who had come by.

During his speech and subsequent discussion, he indicated another policy of non-support for another bridge crossing over the Courtenay River.

“The other people running wold have done a private thing,” said Kosky.

“For me, it’s about representing with behavior and action, which will directly relate to how I will be on council.”