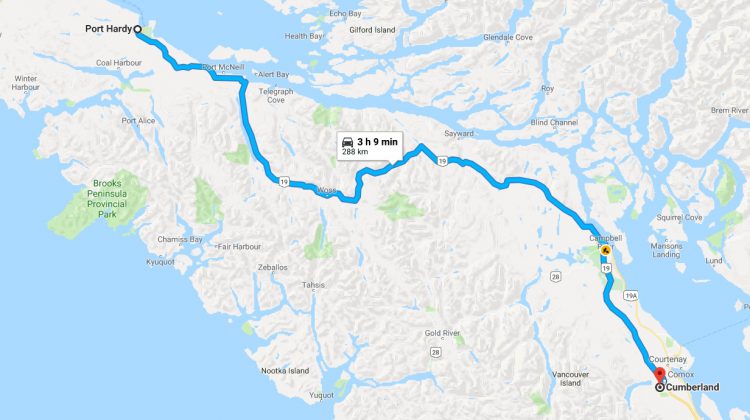 A rough map of the company's maintenance zone, sourced from Google Maps.

The service area covering the Comox Valley, Campbell River and Port Hardy, has been awarded to Mainroad North Island Contracting LP.
The contracts will run for 10 years, with an optional extension of five years. They’ll be taking effect on September 1, the day after the current contracts expire.

“The new maintenance contracts for all service areas require higher standards and a more proactive approach when a severe weather event occurs,” stated a news release from the province on the change.

Under the new contracts, the companies will have to accomplish the following tasks.

-Return Highway 19, Highway 4 and other Class A winter highways to bare pavement within 24 hours of a severe weather event. The previous standard was 48 hours at temperatures of -9 C or warmer.

-Increased communication with the public to rapidly changing road conditions during severe weather events and other incidents affecting travel on B.C. roads.

-When a weather event is forecasted to occur, increase the patrol frequency to four hours in anticipation of the weather event. The previous standard was 24 hours.

Private companies maintain around 47,000 kilometres of road and 2,800 bridges in British Columbia. The total value of the contracts to those companies is around $400 million, each year.

Mainroad North Island has launched a Twitter account, based out of Cumberland, which can be reached here: https://twitter.com/MainroadNIsland