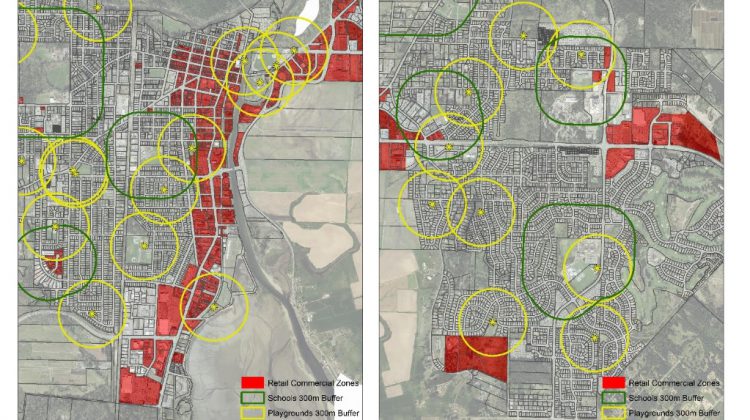 A map of the exclusion zones in the Valley.

COURTENAY, B.C-If you want to buy legal weed in Courtenay, you’re going to have at least six places to do it.

On Tuesday evening, city council decided to adopt a policy brought forward by staff on how cannabis retail would be handled in Courtenay, which included a breakdown on where the stores could go in the first place.

Under the policy, a maximum of six stores for cannabis retail will be allowed within the city, with one operation being set aside for a “government store”.

City staff put together the policy after open houses and surveys looking for opinions from city residents about cannabis sales, the results of which were included in the information given back to council.

There will be buffer zones of 300 metres from local schools and playgrounds, which exclude large portions of the city from stores being able to operate. The stores will also be able to operate from 9 a.m. to 11 p.m.

A map of those zones is shown above.

The application fee for any operation to get re-zoned to allow the sale of cannabis would be $3,000, with a fee for considering the provincial license being $500. The annual license fee still needs to be determined.

The city has approved a temporary ban on cannabis sales, which would be lifted on a case-by-case basis as stores apply for rezoning.

Under the policy, only three dispensaries would be permitted to operate downtown.

While Mayor Larry Jangula didn’t think the 526 survey responses included in the staff report to council were a “glowing assessment” of what residents thought of the matter, he still believed the policy proposal was reasonable, with council voting in favour of adoption.

After the meeting, he expressed some concern about already-licensed liquor stores not being able to sell cannabis, which would have made him “more comfortable”. Regardless, he was still positive about the policy being in place.

“I think we have to move forward on this,” said Jangula.