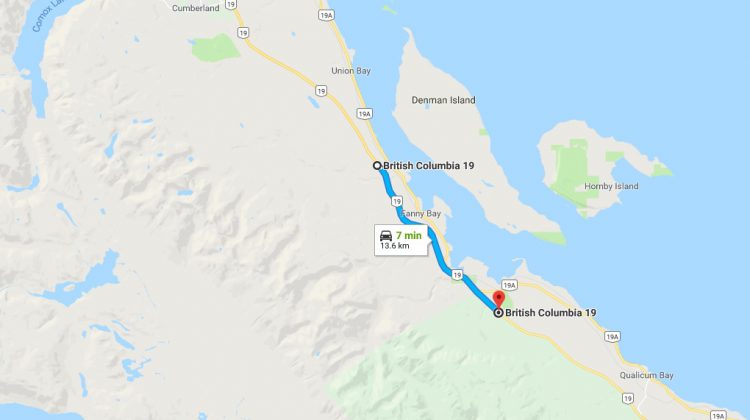 The area of the affected route.

Multiple callers to the MyComoxValleyNow.com newsroom mentioned a stretch of road along the route where pilot vehicles were slowing down traffic to a set speed, with the reason believed to be from filming of the Sonic the Hedgehog.

Joan Miller of the Vancouver Island North Film Commission has confirmed that this was the reason, with the production crew getting a final segment of drone footage along the highway between Buckley Bay and Cook Creek.

According to Miller, the work was meant to be finished last week but bad weather prevented that from happening. Two production vehicles were involved.

“The vehicles would pull out, the traffic would be slowed down with proper traffic control vehicles, they would just slow the traffic down enough that the vehicles could get out ahead,” said Miller.

“The vehicles would put the drones up, get their shot, get out of the way, and the traffic would be back up.”

Miller said the filming was about an hour’s worth of work, and indicated that it would be the final time production would need to work along the highway.

She spoke with the newsroom from Los Angeles, and stated she had been presenting to Netflix earlier in her trip, while hinting at another production slated for the North Island.

“We actually have another large one gearing up right now,” said Miller.

“I’m not privy to release all the details, but there is a lot of local people working on it. It is in the Campbell River, north region, and they will be filming for a few months. It’s an exciting time for us, as production is really focused on our region.”