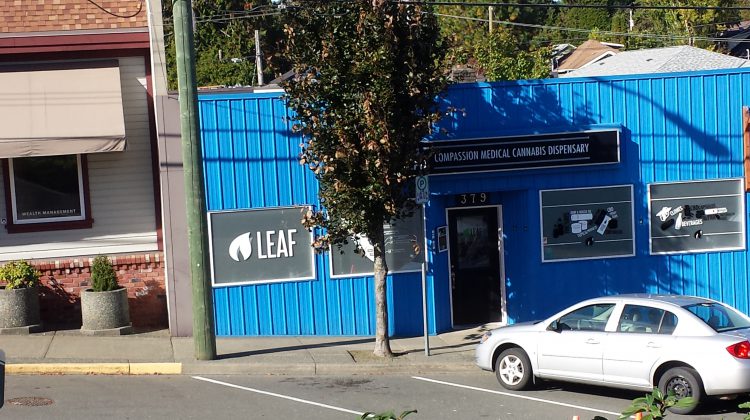 COURTENAY, B.C. – It’s a big day in Canadian history, with cannabis now legal across the country.

Leaf Compassion is a marijuana-based business with a storefront on 4th Street in Courtenay. The signage lists the storefront as a “cannabis resource centre”.

“I’ve been involved in the cannabis industry for about nine years now, and we were the fourth dispensary to open in Victoria and when we started there, we went to Salt Spring Island, then Chemainus and Port Alberni,” he said.

“I’m standing up mostly for people that have no access and really need it (cannabis) right now. We still don’t have one medical cannabis dispensary license in Canada.”

Cheyne said his focus lies on getting cannabis to those that need it mainly for medical use. Leaf Compassion has applied locally for a business license in Courtenay, as well as a provincial license.

“The applications do take a while. We’ve been back and forth with the provincial government and we don’t have any stock in the Courtenay location,” he said.

In 2017, following the storefront’s opening, the RCMP raided the building twice.

“I respect it, it’s not like I’m hating on anybody, even mayor (Larry) Jangula and everybody that was involved,” Cheyne said.

Leaf Compassion has been open Mondays through Fridays, serving as a cannabis information centre for residents.

“I’m just hoping that going forward, we can follow everything smoothly and everything fairly happens for the locals so they can have fair access,” he said.

Cheyne explained that in Courtenay, the province will contact the City of Courtenay, who can then begin the process of rezoning and getting locations licensed.

“Realistically, is it gonna go like Victoria did? Victoria took, I think it was nine to 11 months to have the public meeting for dispensaries. So, for example, if Courtenay takes the next three or four months to adopt their rules, the province contacts them in the next month or so and say we’re not ready, then whenever they’re ready, I can imagine nine to 11 months after that we should actually be licensed,” he said.

“In Courtenay, we’re not gonna be stocking any cannabis products until we can get a license provincially. We’re not doing anything to break the rules the last year. We understand where the RCMP’s stance is in Courtenay, and council’s.”

Cheyne said the storefront will remain open until it’s licensed, and will serve as a venue for residents to ask questions and learn more about cannabis.

However, he noted that they do have hemp CBD oil in the store than you can purchase, with legal photo ID.

“The hemp CBD oil is made from a licensed hemp farmer on Vancouver Island.”

Cheyne said hemp is not a cannabis product, and their producer is licensed.

“If people want to see his license or lab tests about that product, it’s not a cannabis product, hemp has been legal for a very long time. If you go to the hemp license people that are actually licensed from Health Canada, they have the right to actually supply this product,” he said.

“Every single person that’s tried it, they’ve been amazed with the results. It’s literally meant for people that are not in chronic pain, but you’re just looking for that balance. You can’t just take CBD if you’re suffering from chronic pain; you need to add THC to it. That’s gonna be the big legalization of information, and how are these government stores gonna educate people too.”

Cheyne said they do not have any plans to change the way that they operate and will continue to follow regulations as they stand.