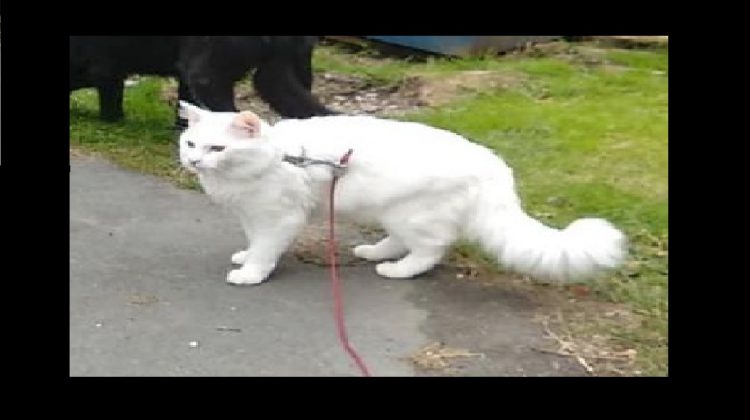 In a suspected cougar attack, a cat was killed in Port Hardy earlier this week. Facebook photo

PORT HARDY, B.C. – A Port Hardy man is mourning the death of his cat, which he suspects was killed by a cougar.

“Last night around 8 in Beaver Harbour/stories beach had my male cat Cosmo on leash just hanging out and went to check up on him. He was nowhere to be found. He’s been gone all night which isn’t like him at all, hoping someone hasn’t taken him,” Eric Blacha said in an online post early Tuesday morning.

Blacha later reported that he found Cosmo in a hole “buried by a cougar” out in the woods, and that he saw the cougar, as well.

Conservation officer Jonathan Paquin confirmed that he euthanized a cougar yesterday near the Beaver Harbour Trailer Park in Port Hardy.

“The cougar was ultimately located nearby, approximately 50 yards from where the cat was located deceased,” Paquin said. “The cougar was ultimately euthanized for public safety concerns associated to the proximity of the trailer park, and (an) elementary school was nearby, as well as we were starting to receive multiple calls of a cougar in that area that’s been frequenting residences and that sort of thing.”

Euthanizing the cougar is never the ideal outcome, Paquin said: “Nobody wants to see this outcome, but unfortunately when a cougar starts to show desensitized behaviours and becomes a public safety risk to the community, then sometimes these tough decisions are required to be made.”

According to Wildsafe BC, Cougars account roughly 2,500 calls to the Conservation Officer Service reporting line every year, however many reported cougar sightings turn out to be animals other than cougars.

Wildsafe BC offers these tips if you encounter a cougar: