Totem poles to be unveiled in downtown Courtenay tomorrow 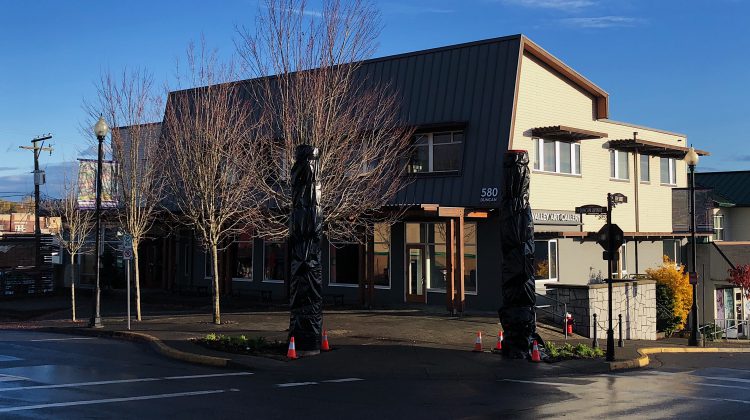 The covered-up poles are pictured in their mounts on the morning of October 26th, 2018. Photo by James Wood/98.9 The Goat/Vista Radio

COURTENAY, B.C- A pair of new totem poles will be revealed in downtown Courtenay this Saturday.

A notice from the Comox Art Gallery (CVAG) has invited residents of the Comox Valley to come out for the unveiling at the intersection of 6th Street and Duncan Avenue at 10:00 a.m. tomorrow.

The poles are part of a partnership between the City of Courtenay, K’ómoks First Nation, and CVAG, meant to symbolize reconciliation and recognition of the relationship between the K’ómoks people and the Valley for thousands of years.

The two poles were carved by artists Randy Frank and Karver Everson, under the mentorship of Calvin Hunt, a master carver. They were also advised by K’ómoks elders in design and technique.

A season indigenous plant garden will also be celebrated during the unveiling, which was created in a partnership with Barb Whyte, traditional knowledge keeper and K’ómoks First Nation elder.

The ceremony will include a pole blessing and acknowledgements, with a light lunch.

Residents are invited to witness the historic event.