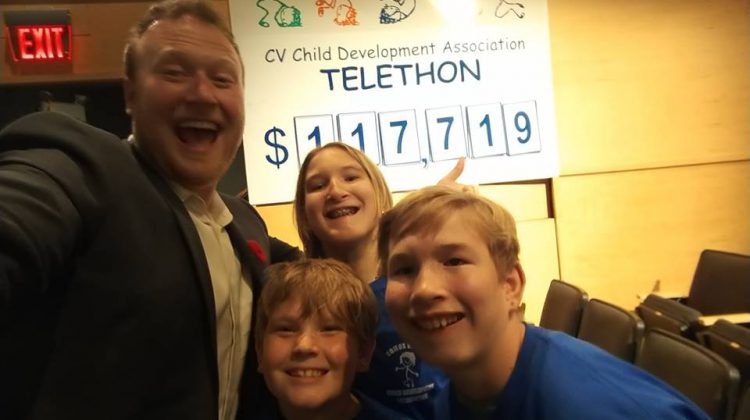 98.9 The Goat's Big Ginger with local youth at the CVCDA's annual telethon on November 4, 2018. Photo by Kieran Wilkie/98.9 The Goat/Vista Radio

COURTENAY, B.C. – There were cheers and laughs at the Sid Williams Theatre on Sunday for the Comox Valley Child Development Association telethon.

The 43rd annual event raised $117,719 to help the CVCDA, according to the association’s Executive Director, Joanne Schroeder.

“It was wonderful, the theatre was quite busy with people most of the day, the entertainment was stellar … there was a big silent auction, social media was buzzing, so it was all really a great positive energy,” Schroeder said.

“We had a fantastic year last year, and knew that we would probably make a little less. It didn’t quite make it up to last year, but we’re super happy with the results.”

Schroeder said plans are already in the works for next year’s event.

“We do take a couple days off, but we will start thinking about next year’s event for sure. It’s lots of work to get it together, but it’s also such a great team that we work with here,” she said.

The funds raised at Sunday’s event will go towards the CVCDA’s new autism centre.

Schroeder said the plan is to have the grand opening for the centre on December 5th.

The association will start offering programs in January 2019.

“Thanks to everybody,” Schroeder added.

“We get such great support from all over the community and it’s deeply appreciated.”