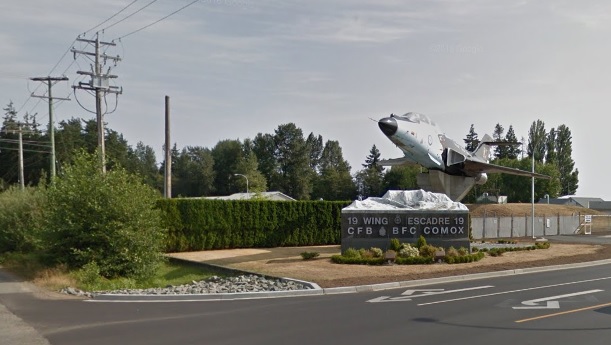 The entrance to 19 Wing Comox is pictured on Google Maps.

COMOX, B.C- Residents of the Comox Valley next to the local airbase may need to get their water tested.

In recent days, 19 Wing has been reaching out to their neighbours about the possibility of perfluoroalkylated substances (PFAS) leaching from the base into local groundwater.

According to Health Canada, high levels of PFAS have been linked to negative health effects, including liver damage and neurological development.

According to the Comox Valley Record, a letter sent to nearby residents indicated that PFAS were found in soil and groundwater at the base, as well as Scales Creek. The exact amount of the detected substance has not been released by the base.

The PFAS have been linked to firefighting foams, which have been used in the past for training at 19 Wing but are no longer used.

A statement supplied by 19 Wing Public Affairs indicated that the training with the foam stopped in 2008, but the foam is still held at the base for emergency use.

“This foam is still held at 19 Wing for emergency use only as the most effective method to extinguish fuel-based fires,” read the statement.

“If used, we will contain the foam as much as possible.”

“As a precaution, and in line with Health Canada guidance, we are contacting nearby property owners to determine whether or not their residential wells are in use and require testing for PFAS,” read part of the statement.

“Water testing for private drinking water wells will begin during the first week of December 2018. Results will be shared with residents as soon as they are available, and will be used to determine next steps and any remediation action.”

The base will be reviewing how PFAS were used in the past, and tests will continue on 19 Wing, nearby well water, nearby creeks and rivers, and properties irrigating with those waters to understand the source and impact of PFAS in the area. 19 Wing’s statement indicated the results of those studies, expected next spring, will inform their next steps and “site-specific” remediation work.

“Any future decisions will be guided by the results of these investigations and the criteria developed by Canada. We will also continue working closely with local environmental authorities and municipal and provincial officials to address this issue and minimize additional impacts to the environment.”

Charmaine Enns, a medical health officer with Island Health indicated that PFAS are not suspected to have gotten into any local water supplies, but the work being undertaken is part of due diligence.

Landowners who have been contacted by the base are encouraged to participate in the well water testing program.

“There are no current concerns about any health impacts, and this particular substance that will be tested for, from the fire retardant, there is a level of which is completely safe,” said Enns.

“What 19 Wing will be looking for is any values that exceed the safety limit. It is not known to be a significant health impact in other areas in Canada.”