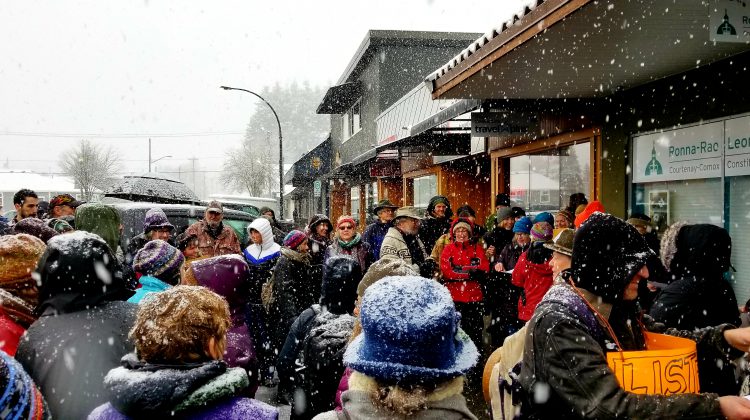 Residents gathered in Courtenay on Jan. 8, 2019 in support of the Wet'suwet'en Nation. Photo by Justin Goulet/Vista Radio

COMOX VALLEY, B.C. – In northern British Columbia, 14 people were arrested on Monday at the Gidimt’en campsite near Houston.

The site is one of two camps set up by members of the Wet’suwet’en Nation.

The goal is to prevent Coast GasLink workers from gaining access to the road near Houston, around 300 kilometres west of Prince George The road is located on the territory of the Wet’suwet’en Nation.

The pipeline would transport natural gas from northeast B.C. to the coast, where a liquefied natural gas (LNG) project is scheduled to be built.

It’s anticipated that there will be further action at the second site, called Unist’ot’en.

Rallies in support of the Wet’suwet’en have been taking place across the province today, including in the Comox Valley.

A “peaceful gathering” was held outside the offices of MP Gord Johns and MLA Ronna-Rae Leonard on 5th Street in Courtenay.

“(It was) a pretty spontaneous demonstration in support of the Wet’suwet’en people who are standing to protect their traditional territories in the north of B.C.,” he said.

“It (the turnout) shows the depth of understanding that a lot of people are starting to develop and the commitment to having a new way to deal with resource development issues in particular in this province.”

Members of the Comox Valley RCMP were at the 5th Street site, but the gathering remained peaceful.

Bradley asked Courtenay-Comox MLA Ronna-Rae Leonard to “stand by her beliefs and leave the caucus”.

“She should leave the party, leave the caucus and sit as an independent and represent our voices there.”

“Hundreds of people” gathered in Courtenay to show their support for the Wet’suwet’en Nation. Photo by Justin Goulet/Vista Radio

One of the many signs displayed at the gathering in Courtenay. Photo by Justin Goulet/Vista Radio

One of the event’s promoters, Wayne Bradley, said the turnout showed “the depth of understanding” from residents. Photo by Justin Goulet/Vista Radio

Resident Richard Day with a sign at the rally. Photo by Justin Goulet/Vista Radio