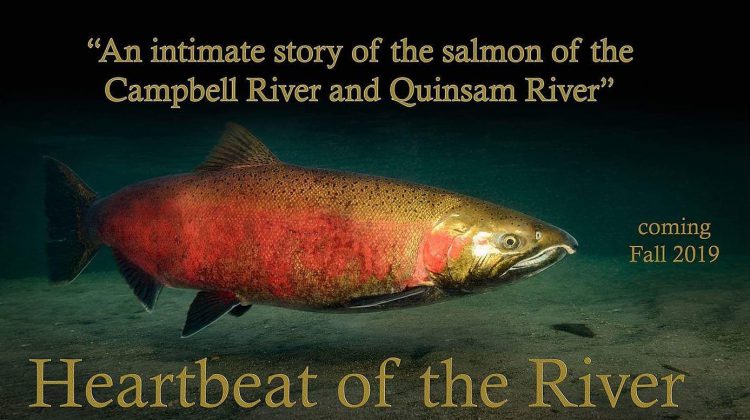 The poster for Eiko Jones' documentary about the salmon in the Campbell River and the Quinsam River. Photo courtesy of Eiko Jones.

CAMPBELL RIVER, B.C. – A Campbell River resident has put together a love letter to local salmon.

Eiko Jones has been photographing around the Campbell River and Quinsam River for six years now.

Along the way, he’s also shot some videos. Now, he’s putting them together and releasing it in a documentary titled “Heartbeat of the River.” Jones hopes to release the documentary in October or November of this year.

“In this last year, I’ve put together more of the content – still have a little more to go this year,” Jones said.

He added that his goal in making the documentary is to highlight the salmon that come to the Campbell River and the Quinsam River.

“I wanted to showcase the salmon from their perspective, not from a human perspective – but from the underwater realm that they live in, instead of human’s impact and use of salmon. I wanted it to be about them.”

Jones said that the goal of all the artwork he produces is to create an awareness and appreciation of his subjects. He said he hopes the same will happen with “Heartbeat of the River.”

“In creating art, creating beauty, I hope to allow people to get a glimpse of what I see and see the beauty of the natural world.”

He said people will then decide what to do with it: whether to appreciate the salmon or not.

Jones is also working on a book, which he wants to publish at the same time as the documentary’s release. He said the book focuses on salmon from a broader approach, and not just localized.

“I look at the salmon in the Campbell River and the Quinsam River – being the salmon capital of the world, but not just for fishing. That (salmon) is what brings all the life here. The whole food pyramid is starting from the herring and the salmon.”

“They support so much more than just the fishing economy.”

“They’re an important species, and a good indicator of the health of the rivers too.”

To see the trailer for the documentary, follow this link.