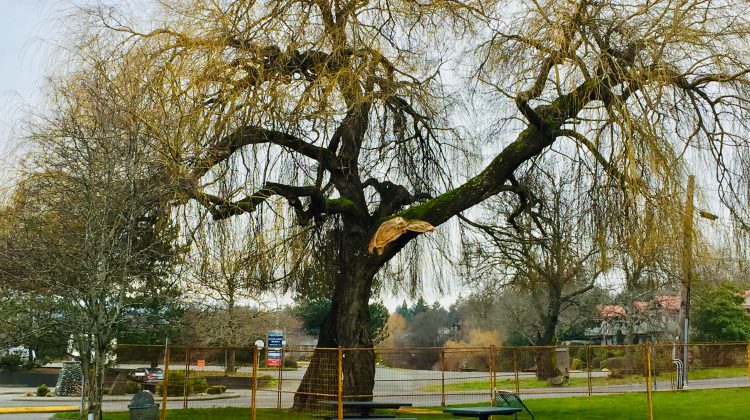 Yellow tape that surrounded a willow tree after it lost a branch has been replaced by metal construction fencing, to keep visitors clear. The tree is located near the Comox Harbour. Photo by Troy Landreville/98.9 The Goat/Vista Radio

COMOX, B.C. – It will be awhile before the Town of Comox decides what to do with a damaged willow tree near its harbour.

A major windstorm in mid-January ripped a significant branch off the tree on the west edge of Marina Park.

A consultant arborist inspected the tree yesterday and will submit a report to the Town.

Roughly six weeks from now, the Town’s superintendent of parks Al Fraser will look at the report and after that, a decision on what to do with the tree will be made.

The willow tree has been in a state of decline for many years, according to Fraser.

“We’ve been monitoring it as time goes on,” Fraser said. “With that branch coming off, we just wanted to err on the side of caution and identify that that area around the tree is a no-go zone for the short term until we have a full-blown arboricultural assessment done to the tree.”

Yellow tape that surrounded the tree after it lost the branch has now been replaced by metal construction fencing, to keep visitors clear until a decision is made.

“We have that fencing up just as a precautionary (measure), because that one limb came down and it’s an old tree and it obviously has some issues,” Town parks department chargehand Kirsten Edwards told the MyComoxValleyNow.com newsroom yesterday.

“It’s mostly for security and public safety. We don’t have (the fence) there necessarily to signify that its demise is imminent. Our train of thought would be to always keep any tree if at all possible.”