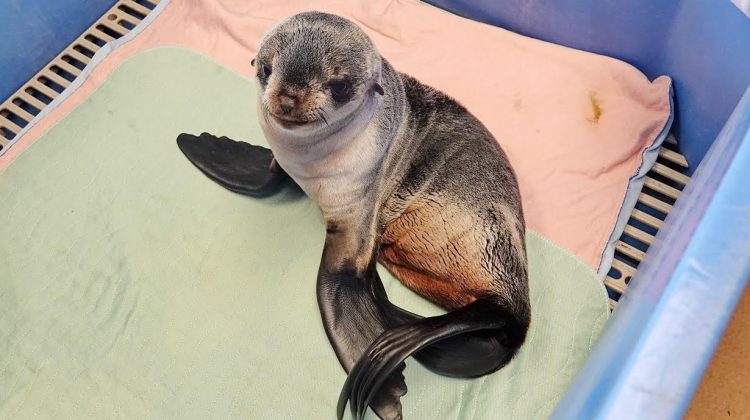 NORTHERN VANCOUVER ISLAND, B.C. – Mo appears to be on the mend.

The seven-month-old northern fur seal pup, nicknamed Mo by her rescuers, is in care at the Vancouver Aquarium Marine Mammal Rescue Centre, an Ocean Wise initiative, after employees of a salmon farming operation spotted her swimming irregularly in waters near Hardwicke Island on Monday.

On Tuesday, Vancouver Aquarium veterinarian Megan Strobel reported that the pup was “quite quiet,” and suffering from low blood sugar, hypoglycemia, dehydration and hypothermia.

She also developed some diarrhea, a distressing sign for her age and species.

Today, she’s showing signs of improvement; however Vancouver Aquarium head veterinarian Martin Haulena said she still has a long way to go to a full recovery.

“The pup is starting to look a little better over the last 24 hours,” Haulena said. “I was quite worried yesterday and the night before, for sure. She had started becoming quite lethargic, was showing some abdominal discomfort, (and) diarrhea had started which is really bad for an early stage animal like her.”

But vets altered her fluids as well as modified her diet and caloric intake, Mo has begun to respond to treatment.

“She really seems to have perked up,” Haulena said. “I’m starting to become a little bit happier about her condition but still quite worried about her, for sure.”

Haulena said any animal that comes into the rehabilitation is one that is quite sick, and the pup was in very poor condition when she arrived in Vancouver from Campbell River on a flight donated by Pacific Coastal Airlines.

If she gains weight, displays adequate foraging activity, and shows that she is strong enough to avoid predators on her own , the pup will be released into the wild in a couple months.

About the Northern fur seal

At present, the species does not have an established rookery in Canada, although experts believe they did before the maritime fur trade.

The four- to five-month breeding season is followed by a seven- to eight-month pelagic foraging phase, where the animals spend their time feeding mainly in offshore waters. The waters of B.C. are considered an important foraging area; the largest numbers occur in waters off B.C. from January through to June, approximately 20-150 km offshore.