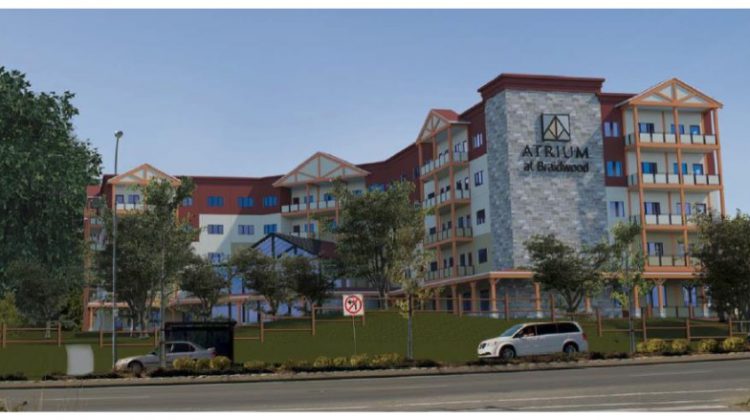 A draft image of the building.

COURTENAY, B.C- A possible senior’s housing project in central Courtenay has gotten taller to meet the desires of city council.

The site, which is called the “Atrium on Braidwood”, would be located between the Valley’s current RCMP detachment and the Prime Chophouse, reaching up from Ryan Road to Braidwood.

The facility is being planned by Sussex Retirement Living, an Ontario-based company.

The company is looking to rezone the land to allow for a full-service retirement residence, with multiple levels of care.

Their initial application had 143 suites in total, with a mix of living styles, and was four stories in height. That’s now been changed.

Detailed plans about the facility first came to Courtenay council on December 17, and met an obstacle with council’s desire for a path between Braidwood and Ryan Road, which the developer had strongly opposed in their discussions with city staff.

The opposition is due to the type of residents the company would be housing in the facility, with some living in “memory-care” units. The company feels that those residents would be negatively impacted by nearby foot traffic.

The issue returned to city council on Monday evening, after the applicant changed their building plans to provide the path.

The footprint of the building has now shrunk, but the height has risen to five stories. The path would run along the east side of the property, and be 10 feet wide.

The company is asking the city to purchase the land needed for the path from them, and be responsible for construction of the path. They’re also asking for the city to include a fence between their property and the path, and to deal with any issues that could arise from pushback over the path’s location.

They also suggest the city include a section of the path that won’t affect the root system of a Garry Oak within the route, and indicated that they would provide a construction estimate.

The changes went over well with council.

Councillor Melanie McCollum asked city staff if it was desirable for the city to take over the path, and was told that it would be an upkeep cost. The benefit to the community would be weighed against maintenance costs.

The amended plan for the building passed without opposition to go a public hearing.

After the discussion, Mayor Bob Wells said he thought the move was a great compromise, and that the path would be integral to the community.

As for whether or not it would be worth paying for, Wells said it was something council had asked for.

“Council literally said, this is what we’d like to have, so to have the proponent come back and actually be working towards that, as opposed to saying no, which they could have done (is good)”, said Wells.

“We don’t want to discourage them from the work that they’re doing, but again, it’s really hard to make a comment on an unknown cost. Again, is that too onerous for the proponent, or the municipality, or maybe it’s not that big of a cost to begin with. If it’s not a big cost, then we’ve got nothing to worry about.”

The full letter from the developer to council about the changes can be found on page 41 of the council agenda: https://www.courtenay.ca/assets/City~Hall/Council/Agendas/2019/2019-02-04%20Council%20Agenda.pdf

Council had also asked about possible inclusion of affordable units in the building. In the staff report provided back to them, it was noted that the company expects to see 70 per cent of their residents come from the local area, due to local “wealth levels” of seniors able to fill that amount.

It also states that city policies see developers contribute to affordable housing funds if they don’t include affordable units in their projects.

“This is the most common amenity received by the City through rezoning and was recently applied to the residential apartment at 911 Braidwood Road,” states the report.

“This reserve fund is used to help create affordable housing in the City such as the M’Akola project at 810 Braidwood Road.”

The public hearing for the project will be held on February 19th at City Hall, at 5:00 p.m.