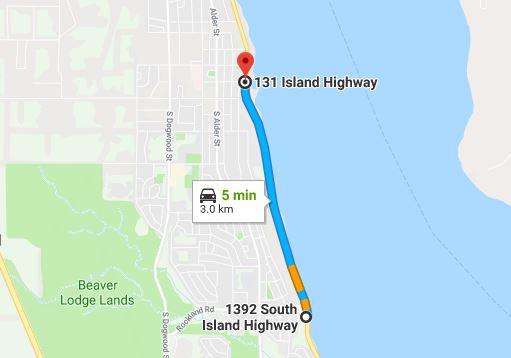 CAMPBELL RIVER, B.C. – If you regularly drive the oceanside route to downtown Campbell River, your passengers will soon have a little more time to enjoy the view.

That’s because drivers will have to ease off their gas pedals, as the speed limit along a section of the route will soon be reduced by 10 km/h.

Later this month, the City of Campbell River will lower the speed limit from 60 km/h to 50 km/h along Highway 19A between Rockland Road and 1st Avenue, to match the speed limit to the north and south of this portion of the route.

“We know people like to get to their destination as easily as possible, and we’re advising drivers that they’ll need less than a minute to travel this three kilometres at the reduced speed limit,” said Drew Hadfield, the city’s director of operations.

“With several driveways for condominium and apartment complexes are located along this route, the reduced speed will make it safer and easier to get into and out of these locations. Lower speeds will also make cycling and walking along the seawalk a more pleasant experience.”

A city release notes that “with improving safety and traffic flow, reducing the speed limit to 50 km/h along this portion of Highway 19A makes this route consistent with arterial corridors such as Alder Street and most of Dogwood Street.”

Hadfield said that over the years, the city has lowered the speed along Highway 19A to 50 km/hr along parts of the route as they’re upgraded.

“The next upgrade will be from south of Rockland to the Big Rock Boat Ramp, so it’s time to bring the speed along this stretch in line with the rest of the corridor,” he added.

The previous 60 km/hr speed limit was a remnant from the days when this road was owned and operated by the provincial Ministry of Transportation and Infrastructure.

When Highway 19 (the Inland Island Highway) was built in 2001, the province devolved most of Highway 19A to the City.