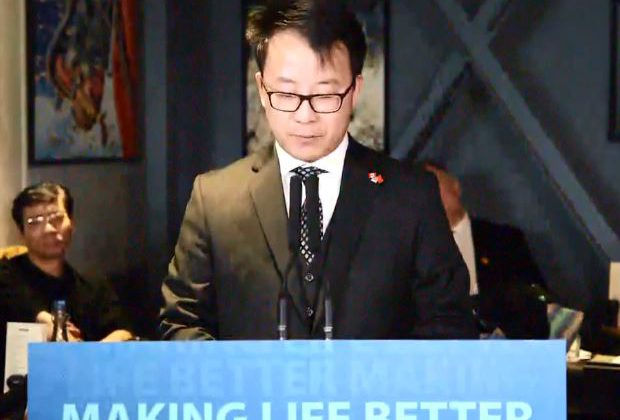 He also loves all the opportunities that have opened up for him and his family, in a community that he has called home for the past five years.

Zhao and his family emigrated from China through the B.C. Provincial Nominee Program, and after arriving in Courtenay in the summer of 2014,  he purchased the Union Street Grill and Grotto.

The restaurant owner spoke during a March 14 press conference at his downtown Courtenay restaurant, to unveil a pilot project that the provincial government says “will spur economic growth in smaller centres throughout the province.”

The City of Courtenay and the Town of Comox were among the first of 30 communities to join the newly launched Provincial Nominee Program (PNP) Entrepreneur Immigration Regional Pilot, which is focused on drawing entrepreneurs from around Canada to establish businesses in regional communities.

To be eligible to participate, a community must have settlement and business supports in place to help newcomers successfully integrate.

“After looking throughout B.C., we saw great potential to run our business here in Courtenay,” Zhao said. “My family was able to start this wonderful journey because of the Provincial Nominee Program.”

Zhao said he and his family are “incredibly proud” to establish roots here.

Minister Bruce Ralston is in Courtenay to announce a new pilot program focused on attracting entrepreneurs and new businesses to smaller communities in BC.

Posted by Government of British Columbia on Thursday, March 14, 2019

Regarding the pilot, Courtenay-Comox MLA Ronna-Rae Leonard said Courtenay and Comox offer diverse economies and an attractive lifestyle for newcomers and their families.

Comox mayor Russ Arnott added, “The Comox Valley continues to be one of the fastest growing regions in the province. We want to attract new people new people and new businesses to drive economic growth and job creation.”

Zhao spoke to reporters after the press conference.

“We enjoy the life here, so relaxed here and so beautiful,” he said. “We also wanted to make an investment here and find opportunities. All the people are so friendly, the air is so fresh, and the food is so great.”

Zhao said the province is “very great” because it helps those who want to make an investment in another country find opportunities.

Zhao said he prefers living in a smaller regions such as the Comox Valley: “Canada is like Comox-Courtenay. We get close to our Canadian friends and not only our Chinese friends.”

He said he feels “honoured” to tell his story, and encourages others to experience life in B.C.’s small rural communities.

“They should come to a small community to see how warm (the reception is) here,” he said. “People say hello to everyone (which is) not the case in the bigger community.”