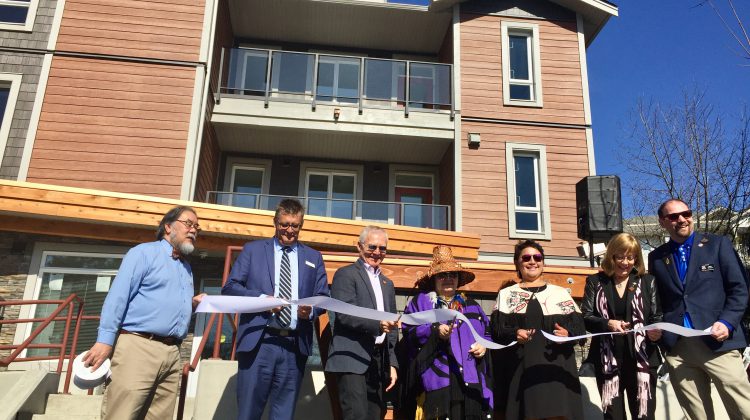 A photo of the Braidwood ribbon cutting on March 21st, 2019. Photo by Troy Landreville/98.9 The Goat/Vista Radio

– With files from Troy Landreville

The project is a new housing complex at the end of Braidwood Road in Courtenay, put together in a partnership between the province and M͛akola Housing Society to build 35 new affordable rental homes in Courtenay.

The complex is aimed at people with low to moderate incomes in the Valley, who are at risk of homelessness, including Indigenous peoples. The opening of the project will now mean more affordable housing options.

M’Akola chief executive officer Kevin Albers told the MyComoxValleyNow.com newsroom said it was a great day, reflecting on the day in May 2018 when ground was broken on the project.

“The most exciting days of the work that we do, every day of the year, is moving people into affordable housing, to be able to see them achieve affordability because of the hard work that we do,” Albers said.

“That’s what makes all the difference in the world and that’s what drives our team to do the work that we do.”

Albers said building is geared towards helping people who are struggling to make ends meet and provide for themselves and their families because of the high cost of rent in places like Courtenay and other places in B.C.

“͞Indigenous peoples are heavily over-represented among British Columbians who are experiencing homelessness, so these homes are good news with the potential to change lives of people in the Comox Valley,” said Ronna-Rae Leonard, MLA for Courtenay-Comox, in a press release for the project.

“This project is a great example of how working with Indigenous organizations and municipalities, we can build the affordable homes that Indigenous families and people throughout B.C. need.”

The building is three storeys tall, wood framed, with a mix of studios and one-bedroom units, a common room, and office space. All the units have a kitchen and four piece bathroom.

The M͛akola Housing Society will be the non-profit operator and is providing supports for residents including outreach and counselling, according to today’s announcement.

“Six of the units will be rented at the provincial shelter rate of $375 per month through referrals from Wachiay Friendship Centre for clients registered in its Housing Partnership Program,” read the release.

“Wachiay Friendship Centre will provide those residents with accompanying supports, such as outreach and counselling and a live-in caretaker. Rents for the other units will range from about $580 to $760 per month, and people began moving into their homes in March 2019.”

“The community has been working for a long time to make this happen,” he added.

The mayor said affordable housing is one of the biggest challenges Courtenay is facing, and is a concern shared by other communities across the province and the country.

“Today is truly that day of celebration to see what can be done,” Wells said, during today’s ceremony.

“Every dollar that has gone into this amazing facility, every hour of planning, all the labour has gone towards an incredibly worthy cause. I hope that the new and future residents of these apartments will know how much care has gone into this project.

The ribbon cutting for the project took place today.

$4.6 million in capital funding for the complex came from the province, while the City of Courtenay provided municipal waivers in the amount of $428,000 and provided the land valued at approximately $385,000.

The land was originally purchased through the sale of other property transferred from the Comox Valley Regional District (CVRD), and funded by City of Courtenay, Town of Comox, Village of Cumberland and rural areas.

The CVRD provided $110,000 through its Homelessness Supports Service.

M͛akola Development Services, a development consultancy group that specializes in affordable housing and co-ordinating between non-profits and BC Housing, also contributed $500,000 toward the project.

Albers said that financial commitments “were made at the front end.”

“In other words buying down the mortgage, funds from M’Akola – we actually put in cash into the deal  – the city of Courtenay generously provided the land, BC Housing provided a capital ground and then they provide very preferential financing through the Treasury Board that we utilize so we can pass along those kinds of savings to the residents that will live here.”