Group of volunteers help clean up garbage along Piercy Creek 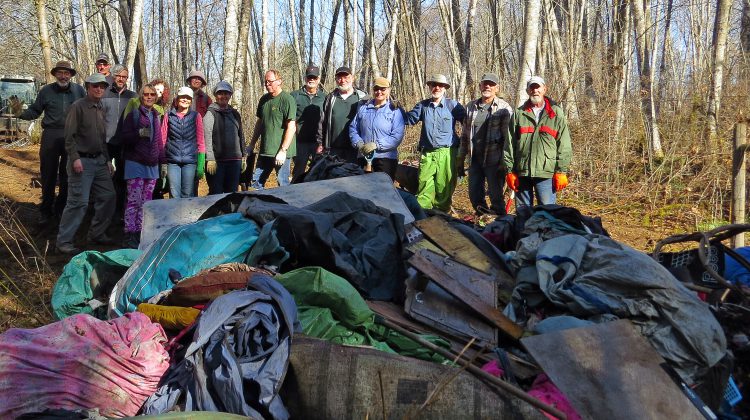 The volunteers were cleaning up garbage in an abandoned homeless camp near the creek.

Robin Harrison, President of the Milliard Piercy Watershed said the group had been there last fall, but came back to make sure it was completely clean.

“Last November we had a cleanup at this one particular spot that was right on the edge of a bank that lead to Piercy Creek,” said Harrison.

“We cleaned up roughly half of it.”

The group went back yesterday afternoon to clean up the remaining garbage and Harrison says it didn’t take nearly as long as the thought it would.

“Yesterday I had arranged another cleanup to get the other half, in an hour and a half we had cleaned up the rest of it.”

He added that the City of Courtenay helped by providing tools to get the job done quicker.

“They helped in a sense of loaning us some tools; wheelbarrows, forks, shovels and rakes, and arranging for the large garbage containers to be hauled away to the landfill,” Harrison said.

Harrison says its good that the group can manage some of the garbage along the creek, but stresses that the public should help maintain the creeks as well.

Next week the city is arranging for a container to be brought so the garbage can be loaded up and taken to the landfill.

If you would like to learn more about the Millard Piercy Watershed Stewards, or their initiatives, visit their website here.