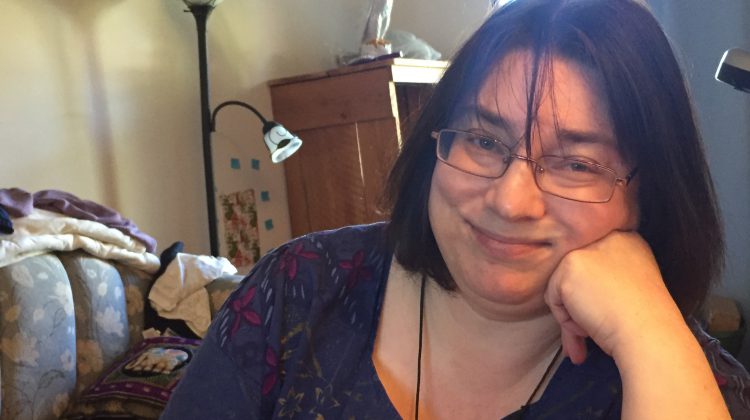 Forty-six-year-old Zoe Nagler is staying at her home at d’Esterre Gardens, a 60-plus housing complex for low-income seniors. Photo by Troy Landreville/98.9 The Goat/Vista Radio

COMOX, B.C. – Zoe Nagler was relieved to wake up today in the place she has called home for the past six years.

Ever so slowly the stress is easing for Nagler, who had been given a deadline of March 31 to move from Comox’s d’Esterre Gardens, a 60-plus housing complex for low-income seniors.

Management had deemed the 46-year-old to be too young to live in the complex.

“This present board decided to enforce the technicalities of the rules more closely than the previous board had done,” Nagler said. “And they decided that because I was 46 rather than the 55 that you have to be with disabilities, that I should be evicted.”

The Jan. 7 eviction notice was a crushing blow for Nagler, who has cerebral palsy and suffers from chronic fatigue syndrome.

Through media exposure, she was able to hire a lawyer pro bono to defend her through arbitration.

“I am profoundly relieved,” Nagler said.

“I am just recovering from the stress, because I have been under intense stress since the beginning of January and… the whole ordeal is over but you have to understand, I’ve been living in fear of the date of March 31st since the beginning of January. So it’s going to take probably I would say until the end of this month just to come down and relax from all the stress because this is exactly the kind of stress which is worst of all for someone in my position.”

Nagler’s lawyer Joe Marrie said the notice to end tenancy was found to be invalid by the Residential Tenancy Branch.

“(The) d’Esterre Gardens is relying on Section 49.1 of the Residential Tenancy Act which is designed for subsidized housing bodies that have to be public housing,” he explained. “There’s a regulation that spells out who is public housing.”

Marrie said d’Esterre Gardens didn’t fit the definition in the statute and further, they had never required Nagler to prove her age, which, he noted, was another requirement in the statute that they had missed.

“And then finally, the agreement itself had to provide for this kind of eviction which it didn’t,” he added. “It did for income-related things but not for age, so for three reasons, the section didn’t apply, so the branch said this is invalid just because the society wasn’t entitled to use that specific section of the act.”

Nagler felt she had to defend her right to stay because she received a shelter allowance for rent and “that’s about all I have.”

“Housing costs are hard, even for someone who can work a full time job,” Nagler said.

Nagler said that she is unable to work due to health issues: “I don’t have the physical endurance to do a day’s work.”

With the threat of eviction behind her, all Nagler wants to do is put the whole situation behind her and “be the tenant that I always was, and want to be.”

According to a report from CHEK News, a second tenant, 53-year-old Teona Sparks, received the same eviction notice but decided against an appeal and was getting ready to move out at the end of March.

The MyComoxValleyNow.com newsroom has reached out to the management of d’Esterre Gardens for comment.