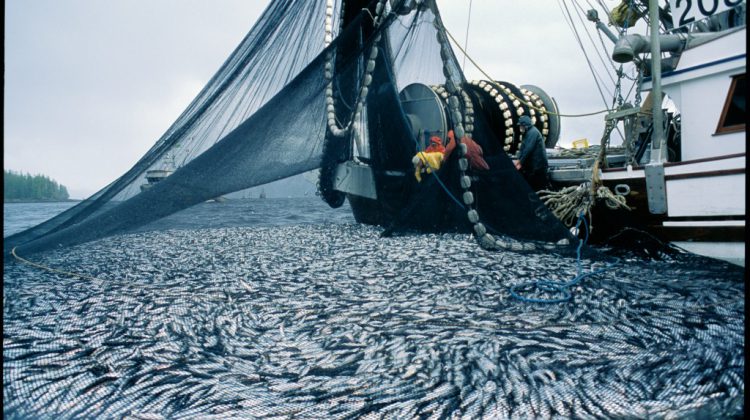 VANCOUVER ISLAND, B.C. – The herring roe fishery on the Strait of Georgia has wrapped up.

And those who are against the fishery are gearing up their opposition for next year.

The fishery has sparked heated opposition from environmental groups including Conservancy Hornby Island which launched an online petition on change.org.

As of Monday afternoon, support for ‘Say NO to the Pacific Herring Roe Fishery’ had grown to 80,259 signatures.

The group’s president, Grant Scott, said that the DFO grinds up 100 percent of the males and takes the roe out of the females, and the carcasses go to feed the stock in fish farms and is also used for pet food.

Over the weekend, Vancouver Island Coastal Communities members passed a resolution asking the Department of Fisheries of Oceans to impose a moratorium on the fishery or impose a “substantial reduction in the allowable catch volume effective in 2020.”

“It’s an advocacy position that came through the regional district last month,” Arbour said. “Many constituents, different people came up with the topic and it moved to our board at the regional district as something to bring for debate at the VICC. And so the debate happened and it was close to unanimous.”

Arbour said he was speaking on behalf of his constituents.

“It’s not something we control at the regional district (level) but often we have to represent our constituents and their view in terms of (advocating) at the senior level government. In this case we knew that the K’omoks First Nation had also expressed some concern and asked for some type of reduction with the federal government and the Qualicum First Nation, as well, I understand had some concerns.”

So I think there was a kind of groundswell of support for this. Sometimes you have to provide a voice (for) your constituents and raise the issues that people want to hear about.”

The DFO’s regional pelagics coordinator Brenda Spence said she was unaware of the vote.

She added, “Right now, underway, we have the actual spawn surveys being conducted, so those are scuba surveys in the Strait of Georgia and the other stock areas to determine the stock deposition and then we’ll be doing the data analysis over the summer.”

Spence said that the harvest biomass for the commercial fishery is set at a maximum 20 percent harvest rate on a spawning return.

“We achieved less quota which is somewhat typical in these fisheries for the sein fishery and the gillnet fishery,” Spence said.

“They didn’t fully achieve their quotas. They are quite time constrained on when they can access the fish, around the weather and the roe herring maturity, so it’s quite common for them to be under quota. For both fisheries, they got a fair amount of their quota and it was successful for them.”

According to the Department of Fisheries and Oceans, spawn flights concluded on Wednesday, April 3rd, with the spawn dive survey ending April 13th.

The Strait of Georgia roe herring seine fishery opened March 9th, and closed March 15th with fishing occurring on March 9th and 10th, from North West Bay to Brant Point, and on March 13th from Qualicum Beach to French Creek.

According to Spence, the DFO will do both a stock assessment for the 2019 spawning season, and then a forecast for the 2020 season.

It will also do a post-season review forecast with stakeholders including First Nations and other interested parties.

“Those kinds of conversations about future measures would probably be taking place in the fall season, looking forward to the next planning cycle,” she added.

“But we are interested in further engagement with the public and others, given the attention and concern people have with the Strait of Georgia.”

Spence said the DFO does a management strategy evaluation where they look at the 20 percent harvest rate for herring, to see if it’s sustainable when applied over time.

“So we’re early in the stage of that process for Pacific herring,” she said.

“We started on the west coast of Vancouver Island stock assessment area… which is Tofino, Uclulet, that sort of area and we’ve also done this in the Strait of Georgia where we’ve (used) stimulation testing, looked at the harvest rate, and applied it over time from what we understand about the stock dynamics, to see if it’s robust.”