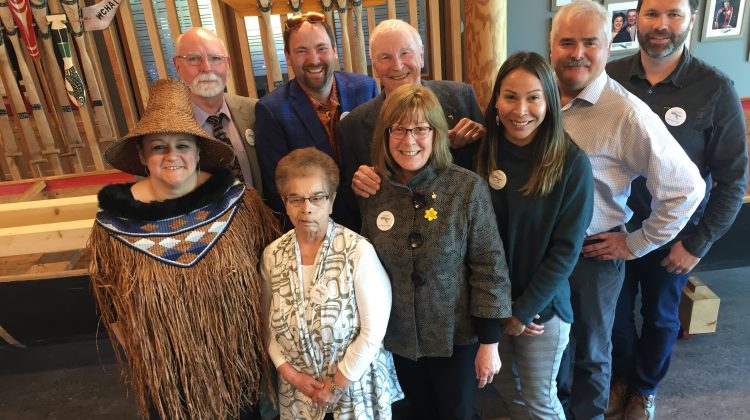 Dignitaries gathered for a photo following the announcement of $1 million in provincial funding to support the Comox Valley Project Watershed Society's acquisition of the Kus-kus-sum site. The announcement was made on April 24th, 2019. Photo by Troy Landreville/98.9 The Goat/Vista Radio

COURTENAY, B.C. – The Comox Valley Project Watershed Society is one step closer to the acquisition and restoration of the Kus-kus-sum site in the K’ómoks estuary.

Project Watershed, in partnership with KFN and the City of Courtenay, has entered into an agreement with Interfor to purchase and restore the former Field Sawmill site on the Courtenay River near the 17th Street bridge.

The project site is called Kus-kus-sum – meaning tree burial – in recognition of its traditional use by the K’ómoks First Nation as the final resting place for their ancestors.

The project partners intend to restore the former industrial site to saltmarsh, side-channel, and riparian habitats, supporting the recovery of fish and wildlife species, and mitigate flooding in the region.

The overall costs for the acquisition and restoration is roughly $6.5 million.

To complete the purchase of the site, the project partners need to raise more than $3 million before the end of the year.

New Democrat MLA Ronna-Rae Leonard said the provincial grant of $1 million, through the Ministry of Forests, Lands, Natural Resource Operations, and Rural Development, will go a long way in making the project a reality.

“Our government is proud to provide funding for this exciting opportunity to return an industrial site to its former natural state, while honouring the historical presence of the K’ómoks First Nation,” Leonard said, during today’s announcement.

Leonard, who represents Courtenay-Comox, said this funding is a “just reward” for taking the initiative to put reconciliation into action as a matter of course.”

She added that restoring the site to its natural state will have tremendous environmental benefits to fish and wildlife, provide adaptation to climate change, and advance reconciliation with K’ómoks First Nation.

“The historical significance of these lands cannot be overstated, as it was once a site where we traditionally buried our ancestors,” Rempel said. “One hundred-plus years ago we asked for this land back when we were setting out reserves, and we were denied. So today, I raise my hands to the NDP government for getting us one step closer to reclaiming our land so we can enhance and restore the watershed and fish habitat.”

“Support from the province is truly essential in achieving our conservation and reconciliation vision,” he added.